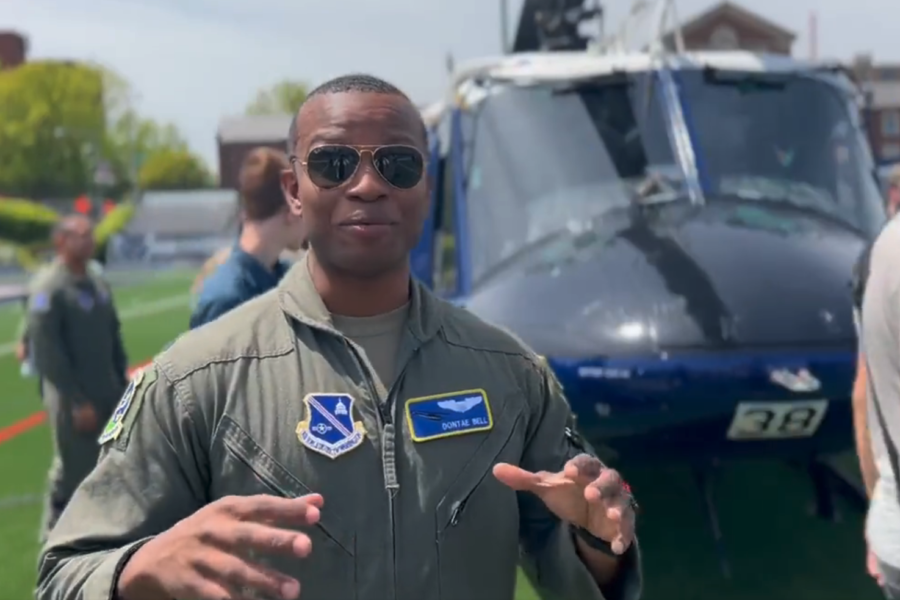 “Them white boys sure can fly,” one says.

It’s 2022, and Bell, an Air Force helicopter pilot, is moderating a discussion with four other Black pilots representing nearly every platform the service flies. But a troubling reality underlies the conversation:

Only about 2 percent of Air Force pilots are Black, and that proportion hasn’t increased much in the past three decades. In fighter aviation, the imbalance is even more stark: Just 60 fighter pilots in the entire Air Force are Black, and one is the service’s top officer, Chief of Staff of the Air Force Gen. Charles Q. Brown Jr.

The challenge of changing that ratio was a key theme of “We Fly Too” on April 30, a half-day event at the historically Black Howard University that was co-organized by Bell, a distinguished alumnus. With about 100 attendees, mostly from Civil Air Patrol and ROTC programs, it kicked off with a town hall conversation between Brown and Dr. Wayne A.I. Frederick, Howard’s president.

Days before his Senate confirmation, Brown set the tone for his tenure by releasing a passionate and personal video discussing the killing of George Floyd. Brown has made equity a priority. He’s created working groups to develop more equitable policies for Airmen in matters ranging from hair regulations to promotion packages, and he’s overseen servicewide studies and surveys on racial disparity.

Brown said on April 30 that he was considering other changes within the aviation community to level the playing field between those with the resources to accumulate private pilot hours before coming to the Air Force and those who don’t. And for those who can’t get private pilot time, he said, the service wants to evaluate other options, such as simulator and synthetic training, that might help to better prepare prospective pilots for success.

“We want to take a look at, do some of the programs we have [that] prevent or discourage diverse backgrounds,” he said.

From his personal experience as an F-16 pilot, Brown also exhorted his audience to be bold and push for change.

“When you’re one of only one or two African-American pilots out of 70-100 pilots in a fighter wing, that’s a lot of pressure,” he said. “But I think there’s so many opportunities to open the door for yourself or for others … you’ve got to challenge the status quo. You’ve got to push a little bit.”

Panelists at Howard also understood that the timeline for steering young minority students toward Air Force careers is short; most of the teens and college students in the room were there because they had found the path already.

For 16-year-old Caleb Smith, an event attendee who made headlines last year when he became the nation’s youngest glider pilot, there was another point of indecision: whether to attend the Air Force Academy or the Naval Academy. When he put the question to the panel of four Air Force pilots, all but one of them academy grads, they chuckled.

“Is this thing on?” said Maj. Saj El-Amin, a C-37 Gulfstream VIP special air mission pilot with 89th Airlift Wing at Joint Base Andrews, Md., tapping his microphone with a wry look. But later, he added some advice: Start early in pursuing the academies, and check out “summer seminar” programs that offer students a taste of life at the schools.

“Seek those activities out—seek some of us out,” he said. “Allow them to put you in contact with a mentor, someone to be able to invest in you so you can really see which of the service academies that you want to be a part of.”

1st Lt. Darian Haynes, an MQ-9 Reaper pilot and Howard alumna, spoke in a panel focused on increasing diversity in aviation about the need to reach young people in underrepresented communities earlier in their education.

“I had zero opportunities to fly. It wasn’t that I didn’t have the means to, I just didn’t know anything about them,” she said. “By going and talking to people in middle school and elementary school, you’re planting the seed a lot earlier. So that way, it can help out with the future of aviation.”

Bold and fearless mentorship is another piece of the equation, said co-panelist Col. Alison Gonzalez, chief of the Strategy Division for Space Force.

“I’ve mentored anyone that approaches me … and I do it out in the open,” Gonzalez said. “Another way to eradicate that stigma is having open, frank, honest conversations in public. So it’s going to make people uncomfortable, but you have to be able to do that and hold those conversations.”

The most emotional moment of the day at Howard came at the conclusion of a panel on women in Air Force aviation headlined by Maj. Gen. Jeannie Leavitt, the Air Force’s very first female fighter pilot.

“As it turns out, I know something that you don’t know,” Leavitt said. She rose and presented Mollison with a certificate she’d signed marking the cadet’s place in Air Force pilot training. Mollison hadn’t known if she’d be permitted to go due to imperfect eyesight requiring a LASIK procedure.

She did her best to direct attendees to the next session while beaming through her tears.

Observing the entire event from the front row was retired Col. Ron McGee, son of Col. Charles McGee, one of the legendary Tuskegee Airmen of World War II. Like his father, McGee served in the Air Force, flying the F-4 Phantom in Vietnam. McGee said he felt an underlying belief that Black people were not as capable as their white counterparts still presented an obstacle to equality.

“I’ve met people today who have never ever heard of the Tuskegee Airmen at all,” he said.

McGee said he was encouraged by the day’s event and the candid discussion about the need for more diversity, but emphasized that it would take a broader effort to solve the problem of equal representation.

“This is a pretty small group with a bigger outreach, and you can feel in this auditorium an attempt to really get the story out and get more and more people involved,” he said. “But most people here already have a desire and interest. We need to be reaching those who don’t know that that interest or that desire even exists.”

In addition to discussion panels, the event included mentoring opportunities and an impressive wrap-up, with aircraft from 1st Helicopter Squadron out of Joint Base Andrews landing on the football field at Howard’s Greene Stadium.