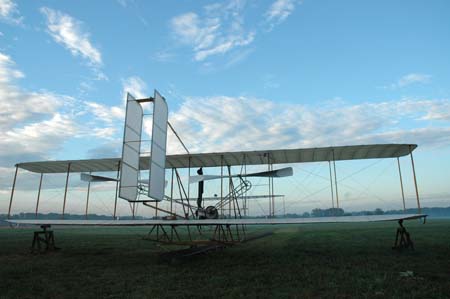 The Air Force, National Park Service, and National Aviation Heritage Alliance are sponsoring the flight of an authentic replica of the 1905 Wright Flyer III aircraft on Oct. 5 at Wright-Patterson AFB, Ohio. The event is to commemorate the 104th anniversary of the first flight of that aircraft type, which is considered the world’s first practical airplane, by Wilbur Wright over Huffman Prairie Flying Field on the base grounds. The event is open to the public. Vintage aircraft builder and pilot Mark Dusenberry, from Dennison, Ohio, will fly the Wright Flyer III. The Wright brothers flew an experimental heavier-than-air-machine for the first time in December 1903, but only with the advent of the Wright Flyer III were airplanes deemed practical, according to NPS. (Wright-Patterson release) (For more, visit NPS’ Web site on Dayton Aviation Heritage.)