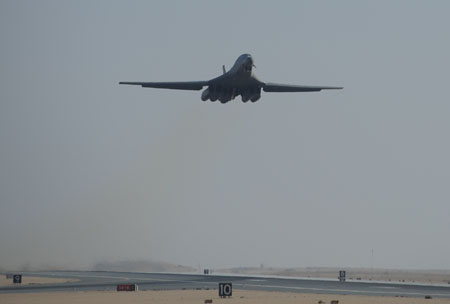 A B-1 bomber flew the 10,000th combat mission for the aircraft type, announced officials with the 379th Air Expeditionary Wing. The historic flight on Feb. 26 started from an undisclosed air base in Southwest Asia and supported operations in Afghanistan, they said. The milestone came less than 14 years after the venerable bomber made its combat debut in Iraq in December 1998 during Operation Desert Fox, they said. SMSgt. Deidre Nickolson-Edie was there for both milestones. “After launching the first combat sortie, I never thought I would have the opportunity to participate in the 10,000th,” she said. “It’s a testament to our airmen who train day in and day out to continue to ensure that we are able to fly such a diverse and always-evolving weapon system.” The B-1 entered service in 1985 and has been in nearly continuous combat for the past 10 years. Originally designed to carry nuclear weapons, it has evolved into a platform that carries only conventional munitions. (379th AEW report by SrA. Michael Charles) (See also Boeing release.)