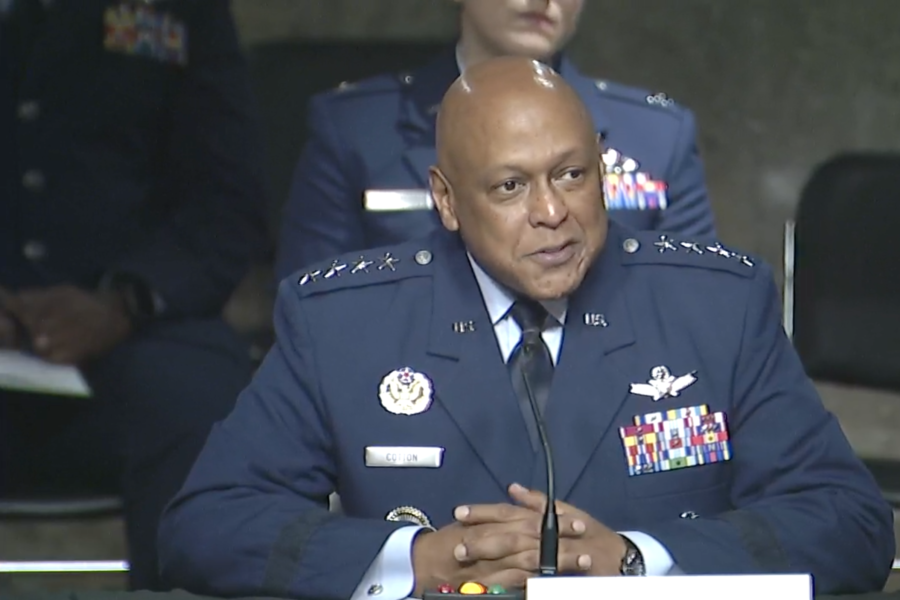 Cotton told the Senate Armed Services Committee during his nomination hearing, one of his top priorities if confirmed will be to move forward STRATCOM’s efforts to study China’s nuclear strategy and reconsider the U.S.’s own doctrines and strategies in a tri-polar nuclear world.

“Minimum deterrence was what we thought of when we talked of China as recently as 2018,” Cotton said. “We have seen the incredible expansiveness of what they’re doing with their nuclear force, which does not, in my opinion, reflect minimal deterrence. They have a bonafide triad now. So we’re going to have to understand more deeply the Chinese nuclear strategy.”

Cotton’s comments mark the latest warning about China’s rapid expansion of its nuclear capabilities. As recently as November 2021, the Pentagon’s report on Chinese military power described its nuclear triad as “nascent,” and officials pointed out that even revised predictions had the U.S. possessing far more nuclear warheads.

At the same time, leaders have also sounded the alarm about the rate at which China is growing its capabilities. In mid-2021, satellite imagery revealed hundreds of intercontinental ballistic missile silos under construction. The Chinese have also recently added to the air leg of its triad with a “nuclear air-launched ballistic missile,” and rumors continue to swirl regarding the secretive, still-in-development stealth bomber, the H-20.

Adm. Charles “Chas” A. Richard, whom Cotton would succeed as head of STRATCOM, described China’s progress as “breathtaking” and a “strategic breakout.” And Cotton, for his part, put the developments in historic terms.

“For the first time since 1945, the first time for us as a nation, we have two near-peer adversaries,” Cotton said of China and Russia. “We have always put together a nuclear defense strategy that has one nuclear peer. We are going to have to roll up our sleeves to ensure that we are doing everything we can strategy-wise within … STRATCOM to ensure that we’re meeting the objectives to be able to have and take care of two near peers. First time in history that we’ve ever seen that.”

Work on that front has already begun, Cotton acknowledged—Richard said in August that STRATCOM is “furiously” rewriting its theories of deterrence to account for a tri-polar nuclear world. But with China and Russia seemingly forging a closer relationship as of late, Cotton said he still wants to conduct a deep dive on the topic.

“If confirmed, that is one of the first things that we’ll dive into, where I can get a better understanding … of what does it look like when you have two near-peer adversaries that act differently?” Cotton said. “They might work together, they might not work together, but we still need to understand, how do you execute against that threat?”

While China has made considerable progress with its ICBMs, it has also demonstrated new capabilities in hypersonics. Last October, the Pentagon confirmed that the Chinese had launched a nuclear-capable hypersonic glide vehicle into space, part of a suspected orbital bombardment system.

Given that progress, Sen. Angus King (I-Maine) asked Cotton if he considered hypersonic weapons, which can fly at five times the speed of sound, to be a strategic challenge for the U.S.

“I do, and I see it as a warning challenge,” Cotton said. “I think as far as when we have a conversation, if confirmed, I think my fellow combatant commanders, we’ll have to have a discussion and understand how to … relook [at] missile defense, relook [at] missile warning, understand what a sensor layer looks like that can achieve those effects to give time, because I need to give decision space to the decision-maker.”

In 2020, Air Force Global Strike Command shifted away from continuous bomber presence missions to bomber task forces—rotations of bombers deploying across the globe to work and fly with allies and partners.

Those task forces have taken bombers everywhere from Australia to Norway, and most recently off the coast of Ecuador. And Cotton offered a strong endorsement of their impact.

“It’s been incredible because what it shows—it shows why we’re the most powerful military on the face of the Earth. And that’s because we have allies and partners. And what it shows is using conventional forces, what strategic deterrence is all about,” Cotton said in response to a question from Sen. Tim Kaine (D-Va.).

“And there is nothing more gratifying than seeing an ally or partner come up on a wing of a B-52 that’s doing an integrated mission over a COCOM area, and seeing the [public] sentiment, if you will, come back from the adversaries on how that mission went. So it’s a win-win for ourselves as well as our allies and partners that participate in those missions that we’re doing constantly across the globe.”