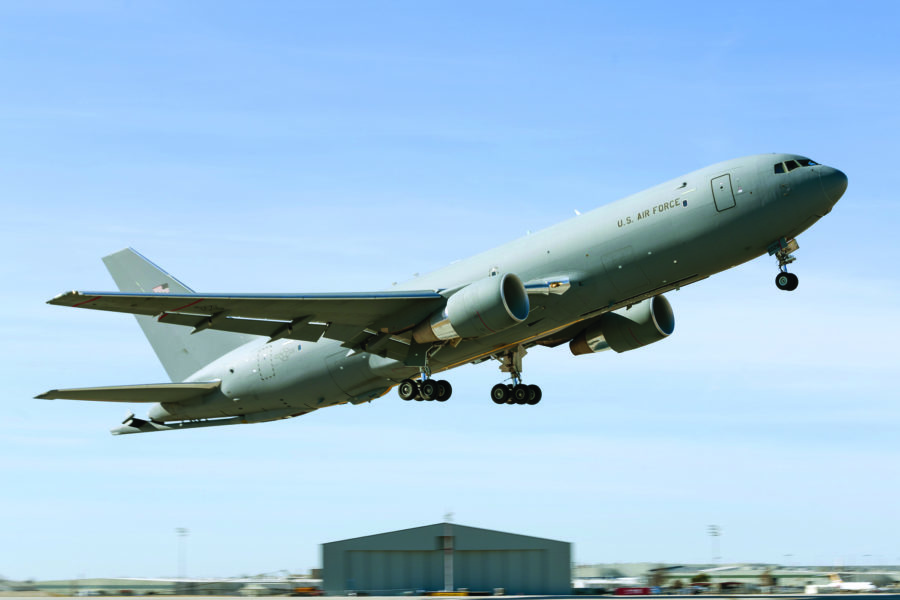 For more than 75 years the U.S. Air Force and Boeing have shared an intertwined history of supporting the highest priority national defense missions. Today, Boeing leads industry investment in pioneering next-generation technology and innovation as the company looks to the future to provide the most digitally advanced, simply and efficiently produced, and intelligently supported solutions to the U.S. Air Force.

Boeing’s industry partnership with the U.S. Air Force dates back to the earliest days of aviation, and continues today in the form of some of the most sophisticated and formidable flying machines on the planet. With an eye toward the future, Boeing continues to develop the cutting-edge capabilities the Air Force needs to maintain its strategic advantage across space and air domains.

To illustrate the depth and breadth of this key national security relationship, we’ll take a look back in time; explore current programs; and look ahead to what the future may hold.

Innovating from the Start

Boeing’s ties to the Air Force began in the wake of World War I and the design in 1919 of the GA-1 attack plane, an armored triplane powered by a pair of modified Liberty engines driving pusher propellers.

“Our history has been intertwined with the Air Force, and it’s been a remarkable story,” said Steve Parker, vice president and general manager for Bombers & Fighters at Boeing Defense, Space & Security.

Lethality and survivability have been the watchwords for both since those earliest days. From the start, “the relationship was built on a foundation of trust,” Parker said. Airmen were climbing into dangerous, experimental machines. Flight was a high-risk endeavor. Trust was essential.

“We’ve always focused on making sure we are able to provide solutions that meet the Air Force’s needs for mission effectiveness,” Parker said.

Boeing has long looked to Air Force veterans for their expertise, and today, more than 15 percent of its workforce are veterans, many of them Air Force vets. The mutual experience ensures Boeing’s workforce understands inherently who their customers really are and what is at stake each time an airplane rolls out for a mission.

Over the years, Air Force and Boeing programs have also been recognized by the whole of the aerospace industry. Boeing-Air Force partnered programs yielded nine Collier Trophies to date, an award that recognizes the greatest achievement in aeronautics and astronautics for the given year from the National Aeronautic Association, Parker noted. “That’s proof of our shared partnership doing revolutionary things together,” he said.

Today, Boeing’s Air Force program portfolio bulges with new developments: The KC-46 tanker and E-7, a replacement for the E-3 AWACS, are both derived from Boeing commercial aircraft and host the newest technologies in refueling and reconnaissance.

The KC-46A Pegasus tanker is a powerful example of the advanced capabilities that Boeing is delivering to the Air Force. With tactical situational awareness and secure datalinks, the KC-46A delivers data as well as fuel to give the 21st century warfighter an information advantage.

The next-generation T-7A advanced trainer was the first Air Force jet designed digitally from the ground up and will serve USAF pilots for generations to come.

Boeing is also reinventing venerable airframes like the B-52 and F-15. As the lead systems integrator for the B-52, it is responsible for integrating new engines into the ageless bombers, which first rolled off Boeing assembly lines more than half a century ago. Engineering the BUFF to keep flying for another 30 years or more, Boeing’s overall integration program also encompasses a major avionics upgrade.

“With investments in open-mission systems architecture, digital engineering and agile software, we are supporting SECAF’s Operational Imperatives to bring leading-edge capabilities to future fighters and bombers,” Parker said.
Looking to the future, Boeing is partnering with the Air Force to develop the capabilities essential to the future of air battle management, the technologies essential to taking Joint All Domain Command and Control from concept to reality. For example, the KC-46’s Wing Aerial Refueling Pods are slated to be the first integration of the Air Force’s Advanced Battle Management System.

“Our mission is always to provide the most digitally advanced, simply- and efficiently-produced, and intelligently-supported solutions to the world’s greatest air force,” said Parker, whose portfolio includes the Air Force F-15, T-7A, and B-1 and B-52 bomber programs, as well as the Navy’s F/A-18E/F and EA-18G Growler aircraft which is the only airborne Electronic Attack platform in the world today and is central to all U.S. combat air employment. He also oversees the 777X wing component manufacturing and assembly.

All of these programs have one thing in common: advanced digital technologies that enable new, improved manufacturing techniques to make aircraft more efficient, more survivable, and at a lower cost to operate and sustain —so they can get to the fight faster and stay there longer.
Those efforts extend to every part of Boeing’s work for the Air Force, where Parker says, “we’re reinventing many of the capabilities the Air Force uses today.”

Speed is always in the discussion, Parker said. “From fighter aircraft to autonomous platforms to work we are doing in our Phantom Works, it’s all about burning down risk and validating and proving out technology and capabilities more quickly and efficiently.”

Another part of the overarching connecting tissue that ties Boeing’s Air Force portfolio together is today’s focus on connectivity and the emergence of a shared battlespace that can be better managed and assessed through the use of open mission systems and agile software techniques.

“To deter the evolving threat, data must be distributed across all the Air Force’s systems,” Parker said. “Data will have to be managed securely and delivered in real time to deliver a collective effect across the DOD’s battlespace. We are working to connect manned and unmanned platforms and sensors together, to provide an overwhelming capability.”

To that end, “we’re focused on connecting everything—Boeing products and non-Boeing products—to provide the disruptive advantage in any location around the world,” he said. “It’s a means of expanding the force capabilities exponentially.”

Parker says that kind of mutual trust and transparency has helped the rapid development of the T-7A, it’s not that every step in the development has been perfect, he said. “You’re always going to discover things along the way— and when we do, we fix them together,” Parker said. “That’s how we have been able to redefine how a clean sheet aircraft can go from concept to first flight in just 36 months and move straight into developmental test and evaluation —something that was previously unheard of.”

At its heart, Boeing is an engineering technology company, one that keeps one eye firmly focused on the future. “We are always working to get them the best aircraft, the safest aircraft, on time and predictable,” Parker said. “Working closely with the Air Force enables us to do that, and the Air Force trusts us to deliver on the commitments we have made.”

To ensure that remains the case, Boeing continues to invest its own resources in areas such as digital engineering technology and advanced manufacturing capabilities, Parker said. “We need to be able to rapidly field new technologies, to rapidly change and pivot as the threat changes, so that the U.S. Air Force always has the most capable assets in the world.”

For Boeing, that means embracing not only its own ideas, but those of partners and even rivals as the Air Force presses ahead with an open systems/open architecture vision of the future. “Open systems will give the Air Force the ability to plug-and-play apps, to integrate third-party solutions,” Parker said. “It means they will always have the latest and best technology available to them,” both in crewed and uncrewed aircraft.

“We want the Air Force to be not only the most capable but also the most connected force on the planet, so that they can make informed decisions in real time,” Parker said. “That’s what it’s about at the end of the day, and that’s what gets us excited, it’s all about their mission.”

A Century of Partnership