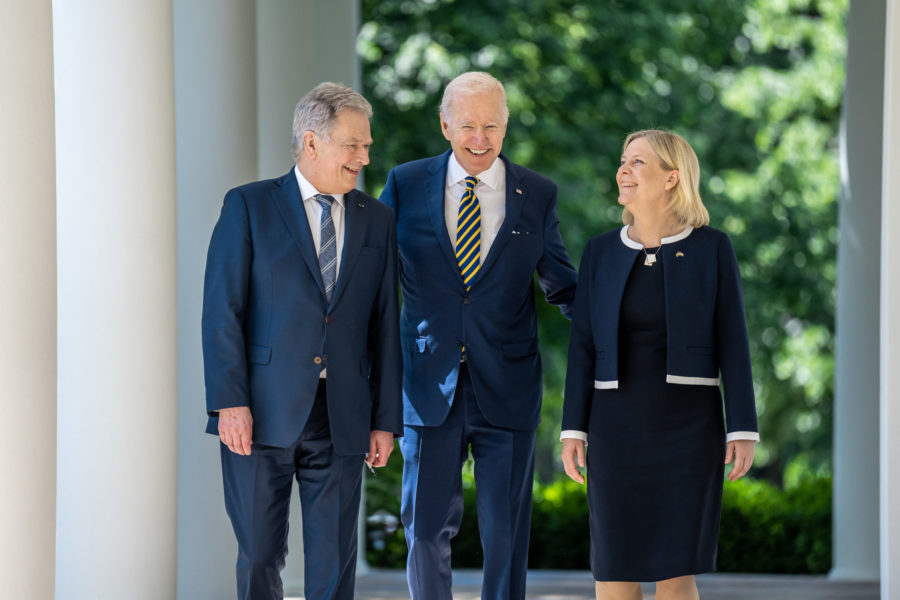 President Joe Biden stood alongside the leaders of Sweden and Finland at the White House on May 19 to declare his “strong support” for their countries’ NATO bids, while Supreme Allied Commander Europe U.S. Air Force Gen. Tod D. Wolters highlighted the specialized deterrent capabilities the High North partners would bring to the alliance, if the concerns of Turkey are first assuaged.

“This is, in my view and the view of my team, a momentous day,” Biden said in a Rose Garden ceremony.

The president offered “the strong support of the United States” for the applications of the two Nordic democracies that are currently NATO Enhanced Opportunity Partners, the closest cooperative framework for non-members.

Sweden and Finland have for years participated in joint exercises and training and have fought alongside NATO troops in Kosovo, Afghanistan, and Iraq. Since Feb. 25, the day after Russia invaded Ukraine, Finland and Sweden also began enhanced intelligence sharing with NATO. On May 18, the nations formally applied to the alliance, which requires approval from all 30 current members.

At the White House, Biden highlighted the benefits Finland and Sweden would bring to the alliance.

“They meet every NATO requirement and then some,” Biden said. “And having two new NATO members in the High North will enhance the security of our alliance and deepen our security cooperation across the board.”

Both nations have Arctic territory and broad training ground for multi-lateral exercises that have increased in recent years, as Russia has heightened its military presence in the Arctic and China has claimed that it is a “near-Arctic state,” with security implications.

Wolters, speaking after a meeting of the military chiefs of defense in Brussels on May 19, highlighted the special capabilities that Sweden and Finland would bring to the alliance as large, forested countries in a cold region that borders the Arctic. Finland, for its part, has a 900-mile border with Russia and is forced to operate within Russia’s anti-access/area denial (A2AD) bubble.

“We will be able to show tactics, techniques, and procedures with Finland and Sweden. They will be able to share with us their unique regional aspects that they have more expertise on than we’ve seen in the past,” Wolters said, noting that the new TTPs will “enhance the overall deterrence capability of NATO.”

“We look at those attributes … as tremendous opportunities to improve our ability to comprehensively deter,” Wolters said. “Those are exciting attributes that Sweden and Finland are going to teach us a lot about.”

Wolters was less effusive about news that Turkish President Recep Erdogan had blocked the start of talks about Finland and Sweden’s NATO entry.

Turkey reportedly wants the opposition Kurdistan workers party, or PKK, declared a terrorist organization by NATO allies, and he wants Turkey to be admitted into the F-35 program, from which Turkey was removed when it adopted Russia’s S-400 missile defense system.

“What we all want the most is for diplomacy to come to the forefront,” said Wolters. “And if that conversation took place, it is my hope as a result of that conversation, we get one step closer to achieving a diplomatic solution.”

Pentagon Press Secretary John F. Kirby said DOD is discussing with Finland and Sweden the security guarantees they may require during the accession period. Russian President Vladimir Putin has in the past warned of consequences should Finland and Sweden join NATO.

“We are actively now talking to them about what kind of security assurances they might need or welcome,” Kirby said.

In Brussels, Chairman of the Joint Chiefs of Staff Army Gen. Mark A. Milley met with both his Finnish and Swedish counterparts, and the DOD said Milley held his first call with his Russian counterpart, Chief of Russian General Staff Gen. Valery Gerasimov, since before the Russian invasion of Ukraine.

Defense Secretary Lloyd J. Austin III also met with his Swedish counterpart at the Pentagon on May 18.

“Russia’s unprovoked invasion of Ukraine, a free, sovereign, and democratic neighbor, clearly demonstrates the threat posed by Mr. Putin to European security,” Austin said in welcoming remarks. “Our two militaries routinely exercise together. Your capabilities are modern, relevant, and significant, and your addition to the alliance will make us all better at defending ourselves.”