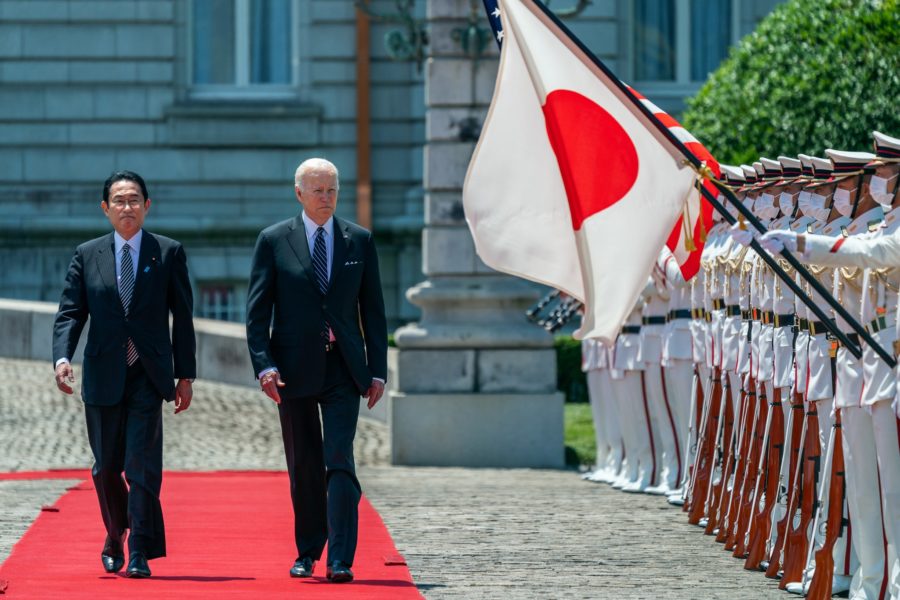 President Joe Biden again drew into question America’s “strategic ambiguity” regarding the defense of Taiwan by saying the United States would become involved militarily if China invaded the island. However, Pentagon leaders declined to discuss military plans or strategy when asked to elaborate.

At a joint press conference with Japanese Prime Minister Fumio Kishida in Tokyo, Biden said China was “already flirting with danger right now by flying so close and all the maneuvers they’ve undertaken.”

When asked whether the United States would get involved militarily to defend Taiwan, Biden said, “Yes.”

“That’s the commitment we made,” the president affirmed.

Biden voiced agreement with the “one China” policy, which acknowledges Beijing’s position that Taiwan is part of China. However, at the same time, the Taiwan Relations Act provides that the United States will supply Taiwan with weapons necessary for its self-defense.

“The idea that it can be taken by force—just taken by force—is just not appropriate,” Biden said. “It will dislocate the entire region and be another action similar to what happened in Ukraine. And so, it’s a burden that is even stronger.”

Biden didn’t say what he meant by getting involved militarily.

At the Pentagon, Defense Secretary Lloyd J. Austin III was asked to elaborate on Biden’s comments.

“The President was clear on the fact that the policy has not changed,” Austin told reporters.

“The president said our ‘one China’ policy has not changed. He reiterated that policy and our commitment to peace and stability across the Taiwan Strait,” Austin said in a joint press conference alongside Chairman of the Joint Chiefs of Staff Army Gen. Mark A. Milley. “He also highlighted our commitment under the Taiwan Relations Act to help provide Taiwan the means to defend itself.”

When pressed on the President’s affirmation that the U.S. would respond militarily, Austin said: “The President was clear on the fact that the policy has not changed.”

“I appreciate the opportunity to not answer a question,” he said in response to a reporter’s question.

“There’s a variety of contingency plans that we hold,” Milley continued. “All of them are highly classified—Pacific, Europe, and elsewhere—and it would be very inappropriate for me at the microphone to discuss the risk associated with those plans relative to anything with respect to Taiwan or anywhere else in the Pacific.”

Asked if he supported sending U.S. troops to Taiwan, Milley said he would render his advice “at the moment in time” to the President and the Secretary of Defense.

Security experts have said Chinese control of Taiwan would pose serious security risks for the United States and U.S. allies in the Pacific.

Biden’s forward-leaning comments are reportedly the third time in his presidency that he has committed the U.S. to military intervention in the defense of Taiwan, prompting Beijing to express “strong dissatisfaction.”

“China has no room for compromise. No one should underestimate the strong resolve, determination, and capability of the Chinese people in safeguarding national sovereignty and territorial integrity,” he added, noting that failure of the U.S. to abide by its agreements “undermine peace across the Taiwan Strait and China-U.S. relations.”