Skip to content
An F-15 Strike Eagle from the 336th Fighter Squadron and two Polish MiG-29s, one with a portrait of Poland’s top World War II ace on its tail, as seen from a B-52H Stratofortress during a February bomber task force mission. Weeks later, Poland offered 28 MiG-29s to Ukraine, a deal that quickly became bogged down in political crossfire. The Soviet-era MiGs are approaching their fourth decade and while effective in air-to-air operations, present fat targets for integrated air defense systems. Airman 1st Class Zachary Wright
Expand Photo 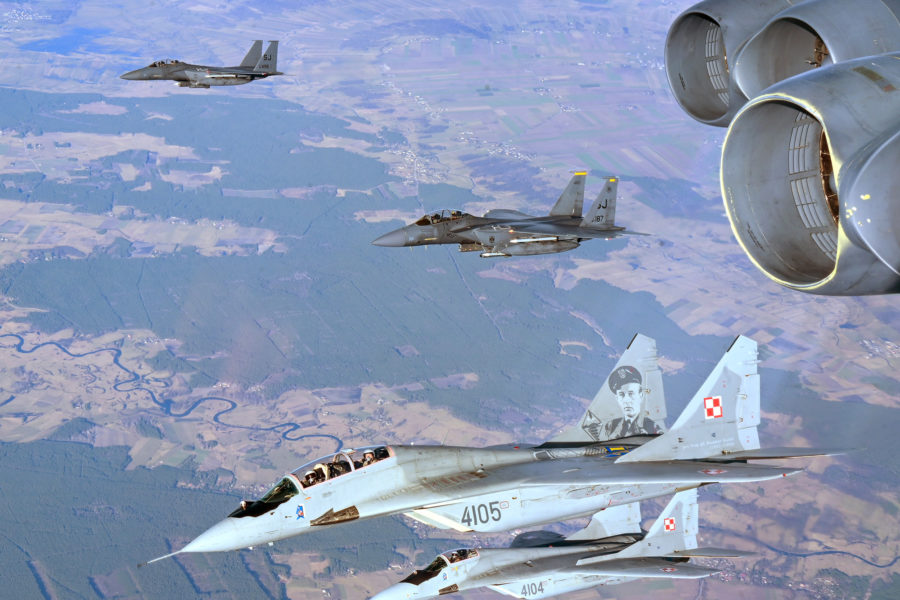 President Joe Biden highlighted the already planned positioning of two F-35 squadrons in the United Kingdom, along with new air defenses in Italy and Germany, when naming the U.S.’s European force posture moves to deter Russian aggression at the Madrid NATO summit June 29.

“Today I’m announcing the United States will enhance our force posture in Europe and respond to the changed security environment, as well as strengthening our collective security,” Biden said alongside NATO Secretary General Jens Stoltenberg at a NATO press briefing.

“We’re going to send two additional F-35 squadrons to the UK and station additional air defense and other capabilities in Germany and in Italy,” Biden said, recounting recent Defense Department decisions. “We’re going to make sure that NATO is ready to meet threats from all directions, across every domain: land, air, and the sea.”

A defense official traveling with Defense Secretary Lloyd J. Austin III and Biden in Madrid clarified to Air Force Magazine that the president’s announcement does not constitute the addition of two more F-35 squadrons beyond those planned for RAF Lakenheath and announced in December 2021.

“The President’s comments at the NATO Summit and the Department’s fact sheet that was released today provided a recap of what the U.S. has done and how we are postured today and into the future,” he added. “It is clear we have bolstered our presence in Europe, and I believe our actions are reassuring to our Allies and partners.”

Semelroth said DOD’s December announcement to incrementally replace F-15s stationed at Lakenheath with the new F-35 squadron was a show of force and commitment to the alliance.

“Those deployments are forward-stationed squadrons that we’re talking about here—that’s still happening,” he said.

In a White House background call June 29, former DOD press secretary and current National Security Council Coordinator for Strategic Communications John Kirby clarified that much of the force repositioning described by the President were moves from positions in Europe closer to NATO’s eastern flank.

The F-15 repositioning was a February deployment of eight F-15s from the 336th Fighter Squadron, 4th Fighter Wing, at Seymour Johnson Air Force Base, N.C., to Lask Air Base, Poland, to augment the eight F-15s already there from the 48th Fighter Wing at RAF Lakenheath, U.K.

“All of those were already there, and the President saw fit that they needed to be moved around closer to the eastern flank to shore up that readiness and deterrence posture,” Kirby said.

Kirby also pointed to the new air defense measures that will be put in place.

“I would also point to the significant air defense and air domain capabilities that will come along with these new posture changes to support the broader package of U.S. combat credibility in the NATO [area of responsibility],” he said.

U.S. Air Forces in Europe did not immediately respond to questions from Air Force Magazine about the changes, and the Pentagon could not provide additional details about the new air defense measures beyond the fact sheet that was released.

At the conclusion of the first full day of the NATO summit, Biden sat down with the leaders of Japan and the Republic of Korea. Australia and New Zealand were also invited to participate in a NATO summit that will approve a new strategic concept that will for the first time address the threat posed by China.

The Madrid NATO Summit has already made history for a breakthrough with Turkey June 28 to clear the way for an invitation to Finland and Sweden to join the alliance.

“Putin was looking for the ‘Finlandization’ of Europe,” Biden said alongside Stoltenberg, referring to Finland’s longtime neutral status. “He’s going to get the ‘NATO-ization’ of Europe. And that’s exactly what he didn’t want, but exactly what needs to be done to guarantee security for Europe.”