Skip to content
President Joe Biden said on April 14 the U.S. will begin withdrawing troops from Afghanistan on May 1, and the U.S. will be completely out of the country before Sept. 11. Screenshot from White House video.
Expand Photo 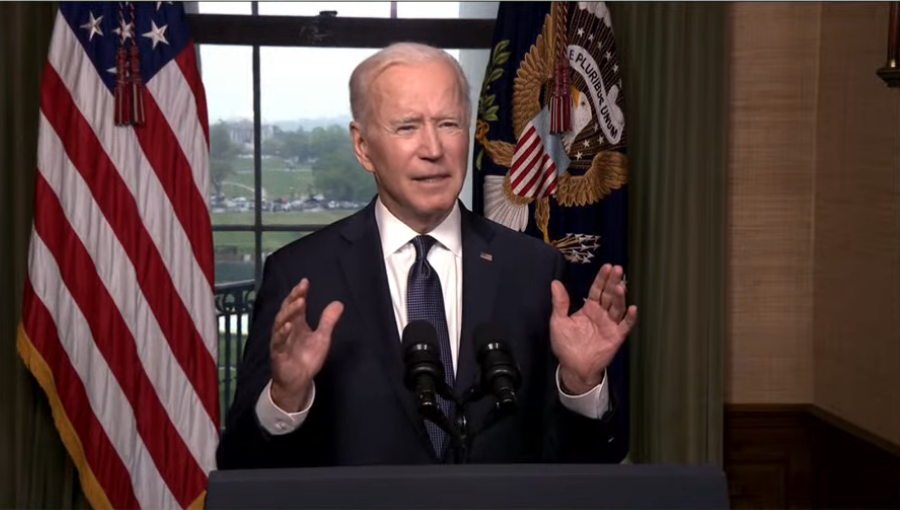 The U.S. withdrawal from Afghanistan will begin on May 1 and finish before the 20th anniversary of 9/11, to allow the American military time to focus more on global terror and increasing threats from China, President Joe Biden said.

During an April 14 address formally announcing the planned end to America’s longest war, Biden said, “We can’t continue the cycle” of keeping troops in Afghanistan and “hoping to create the ideal conditions for withdrawal. It’s time to end the forever war.”

Biden spoke from the White House’s Treaty Room, the same room where former President George W. Bush announced the first strikes on the Taliban in Afghanistan in October 2001. Biden said he is the fourth U.S. President to oversee the war in Afghanistan, and “I will not pass this responsibility on to a fifth.”

Unlike previous announcements on the U.S. presence in the country, the new September deadline is not “conditions-based.” Biden said that would be a “recipe” to stay in the country forever. Instead, the American focus needs to be on global threats of terror in other places, including in the Middle East, Africa, and beyond.

“The terror threat is now in many places, and keeping thousands of troops grounded and concentrated in one country at the cost of billions each year makes little sense to me and our leaders,” Biden said.

CIA director William J. Burns told members of the Senate Select Committee on Intelligence earlier in the day that after years of “sustained counterterrorism pressure” neither Al-Qaida nor ISIS in Afghanistan have the “capacity today” to target the homeland, but there are other terrorist groups, such as Al-Qaida in the Arabian Peninsula, that pose a “much more serious threat.”

The decision extends the deadline laid out in the February 2020 deal with the Taliban, which called for all U.S. troops to leave by May 1.

The withdrawal will start in weeks and will not be done in a “hasty” manner. Biden warned the Taliban that if the group conducts attacks, the U.S. will use “all the tools at our disposal” to respond.

U.S. and international NATO forces will draw down inside the country together. During a meeting at NATO headquarters in Brussels, Secretary General Jens Stoltenberg said allies have agreed together to the same drawdown timeline.

“We face a dilemma,” Stoltenberg said. “Because the alternative to leaving in an orderly fashion is to be prepared for a long-term, open-ended military commitment with potentially more NATO troops. This is not the end of our relationship with Afghanistan, but rather the start of a new chapter.”

Defense Secretary Lloyd J. Austin III, speaking alongside Stoltenberg, said U.S. forces have accomplished the mission they set out to do—to “greatly diminish” the threat to the homeland and make possible civil and political progress.

There is still “too much violence to be sure,” Austin said, noting the Taliban will likely seek to reverse this progress. The U.S. will continue its support for the Afghan Air Force and special mission wing, along with paying the salaries of Afghan security forces to maintain their capability. Additionally, the U.S. will maintain counter terrorism capabilities in the region, he added.

“It is also a fact, however, that after withdrawal, whenever that time comes, the CIA and all of our partners in the U.S. government will retain a suite of capabilities—some of them remaining in place, some of them that we’ll generate—that can help us to anticipate and contest any rebuilding effort,” Burns said.

The new mission, however, is to “responsibly draw down forces and transition to a new relationship with our Afghan partners,” Austin said.

Afghan President Ashraf Ghani said in a statement that he spoke with Biden on April 14 about the decision. Afghanistan “respects the U.S. decision and we will work with our U.S. partners to ensure a smooth transition,” he said.

After Biden finished his speech, he visited Arlington National Cemetery to pay tribute to those killed in the war. The whole country is “forever indebted to them and their families” for their sacrifices, he said.

“We owe them. They’ve never backed down from a single mission that we’ve asked of them,” Biden said of U.S. troops who fought in Afghanistan. “They’ve never wavered in their resolve. They’ve paid a tremendous price on our behalf, and they have the thanks of a grateful nation.”

Editor’s Note: This story was updated at 7:32 p.m. to include comment from CIA Director William J. Burns and again at 8:30 a.m. to correct a date.