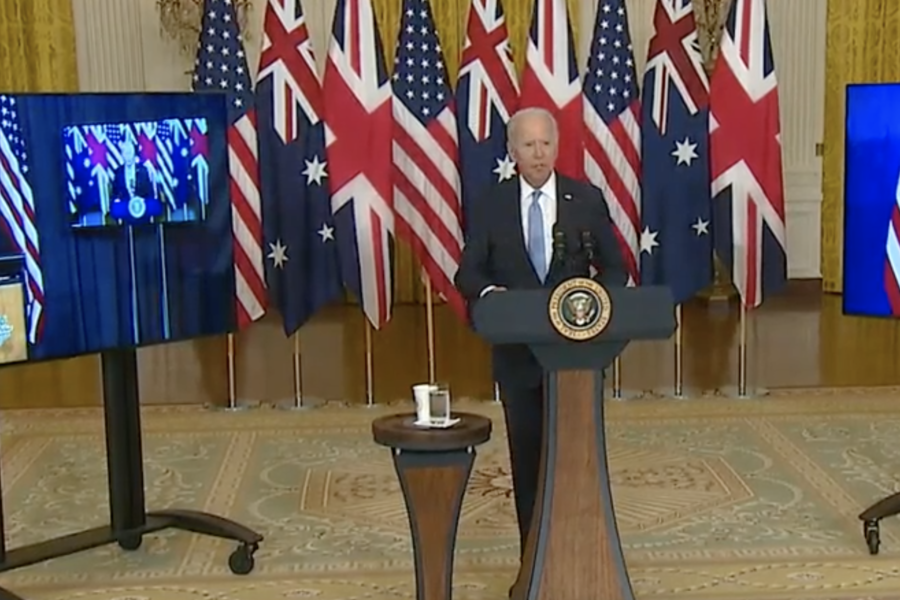 President Joe Biden stood in the East Room of the White House on Sept. 15 alongside video monitors with the leaders of Australia and the United Kingdom to announce the sharing of nuclear submarine technology with Australia, part of a trilateral security agreement to respond to growing Chinese aggression in the Indo-Pacific region.

“The future of each of our nations and indeed the world depends on a free and open Indo-Pacific,” Biden declared after brief comments from his counterparts.

“We need to be able to address both the current strategic environment in the region and how it may evolve,” the President added. “This is about investing in our greatest sources of strength—our alliances—and updating them to better meet the threats of today and tomorrow.”

The new trilateral security agreement known as “AUKUS” for Australia, U.K., U.S. builds on a defense partnership that has been ramping up with Australia in recent years in areas ranging from rotational troops to joint training and the joint development of hypersonic weapons.

The Sept. 15 announcement comes a day after Defense Secretary Lloyd J. Austin III welcomed his Australian counterpart to the Pentagon.

“The kinds of aggressive activities that we’re seeing out of China in the Indo-Pacific region is causing all of us, the international community not just the United States, to make sure that we are focused appropriately on that behavior,” he added.

During his virtual remarks, Australian Prime Minister Scott Morrison said the agreement will lead to a sharing of defense technology among the three partners.

“Our world is becoming more complex, especially in our region, the Indo-Pacific,” he said.

British Prime Minister Boris Johnson added that the agreement will have repercussions for decades to come.

“This will be one of the most complex and technically demanding projects in the world lasting for decades, and requiring the most advanced technology,” he said. “Only a handful of countries possess nuclear-powered submarines, and it is a momentous decision for any nation to acquire this formidable capability.”

All the leaders emphasized that the technology sharing is for nuclear-powered submarines with conventional weapons. The proposed new Australian submarine fleet will not carry nuclear weapons.

“This initiative is about making sure that each of us has a modern capability, the most modern capabilities we need to maneuver and defend against rapidly evolving threats,” Biden explained.

The nations committed to spend the next 18 months in consultations developing a plan for how to help Australia develop the fleet of nuclear-powered submarines. DOD will take the lead for the United States, alongside the Department of Energy and Department of State.

In the afternoon Pentagon press conference ahead of the President’s announcement, Kirby declined to comment on media reports about the agreement or whether it would provoke China.

The Defense Department regularly stresses how China is a pacing challenge for the United States, and actions with Pacific allies and partners are intended to maintain the “international rules-based order.”

“The Secretary has said that he considers the No. 1 pacing challenge for this department to be the PRC [People’s Republic of China],” Kirby said. “We’re going to stay laser focused on that, and our relationship with Australia … is a key part of our ability to continue to maintain that focus.”