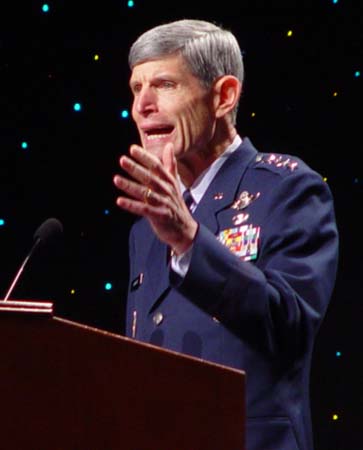 Air Force is going “back to basics” in the way it conducts business, particularly in the nuclear enterprise and in acquisition, Chief of Staff Gen. Norton Schwartz said Tuesday. He also announced new cultural and operational directions for the service and put airmen on notice that they will be held to higher accountability at all levels. In a landmark speech to AFA’s Air & Space Conference in Washington, D.C., in which he presented the Air Force’s get-well plan after recent failures in nuclear surety and in buying a new tanker, Schwartz said the service will do everything possible to restore its credibility with the Pentagon, Capitol Hill, and “the American people.” The service will “enforce accountability” at all levels, particularly in the nuclear enterprise, where he said anything less is unacceptable and won’t be tolerated. The Air Force will focus anew on deterrence, he said, adding that the word is descriptive not only of nuclear capabilities, but represents “the spectrum” of what the Air Force can do. Schwartz announced a new status for unmanned aerial vehicle operators on a par with manned aircraft pilots (see below), commensurate with the large and growing importance of the UAV mission. He promised a more disciplined acquisition process that sticks to “needed performance … not excessive performance” in new systems. Requirements missteps and an “emotional” debate helped derail the KC-X tanker replacement program, an experience “we do not want to repeat,” Schwartz observed. Not to take on a reform of the way USAF buys major systems would be a grave mistake, he said, warning, “the health of defense acquisitions is at stake.”