Skip to content
Polish F-16s and MiG-29s escort a B-1B Lancer during a training mission for Bomber Task Force Europe on May 29, 2020. Aircrews from the 28th Bomb Wing at Ellsworth Air Force Base, S.D., took off on their long-range, long-duration Bomber Task Force mission to conduct interoperability training in the Black Sea region. Polish Air Force courtesy photo.
Expand Photo 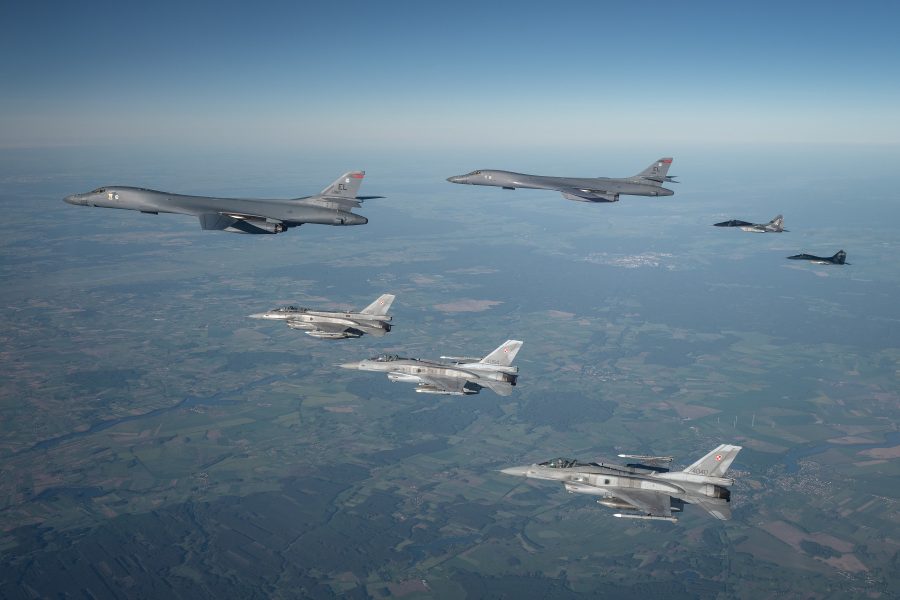 Two B-1B Lancers on May 29 flew another long-range bomber task force flight to Eastern Europe, integrating with Ukrainian fighter jets and Turkish KC-135s for the first time, as well as with multiple other allied nations.

The flight of B-1s from the 28th Bomb Wing at Ellsworth Air Force Base, S.D., marked a rare trip into the Black Sea region, where they met with Ukrainian Su-27s and MiG-29s.

The B-1s flew direct to the region, first integrating with Polish F-16s and MiG-29s, and Romanian F-16s and MiG-21s. The Polish and Romanian aircraft provided escort and combat patrol overwatch while in the Black Sea region, U.S. Air Forces in Europe said in a release.

“Bomber Task Force missions to Europe demonstrate commitment to our allies and partners, all while providing a clear deterrence message to any adversary,” USAFE boss Gen. Jeffrey Harrigian said in the release. “The integration of our strategic bomber presence across Europe proves that the U.S., alongside any ally or partner, stands ready to deter, and if needed, can employ these capabilities together.”

In response, Russia scrambled Su-27P and Su-30SM fighters to intercept the aircraft “in neutral waters,” the Russian Defense Ministry said.

Additionally, the B-1s joined with Greek F-16s for a flyover of Skopje, North Macedonia. The bombers received fuel from the 100th Air Refueling Wing at RAF Mildenhall, England, as well as USAF and Turkish KC-135s from Incirlik Air Base, Turkey.

The flight was the latest in a series of similar long-distance B-1 training flights. On May 5, two Ellsworth B-1s flew directly to Estonia.