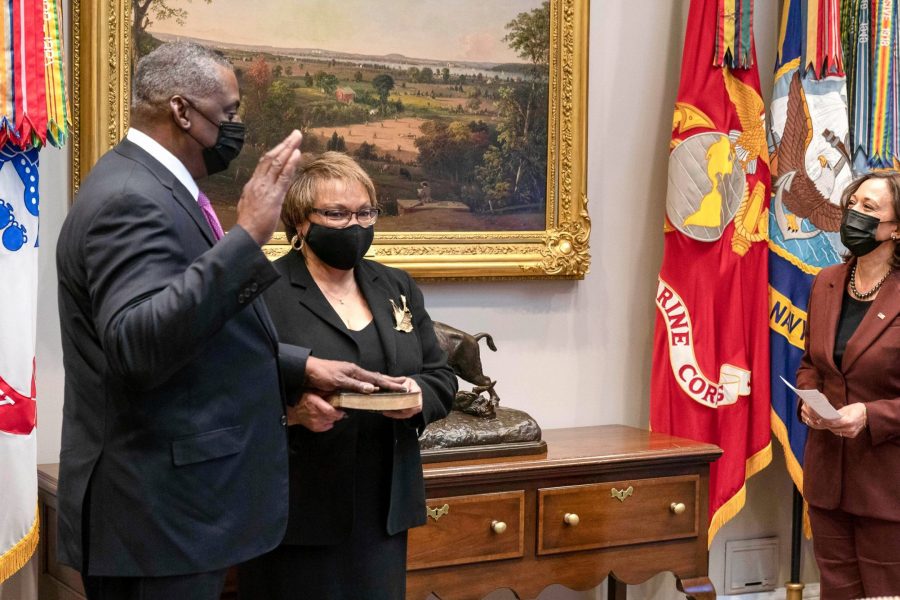 Austin Ceremonially Sworn in at the White House

Vice President Kamala Harris on Jan. 25 ceremonially swore in new Defense Secretary Lloyd J. Austin III at the White House, days after he started the job and has already announced multiple changes to the Defense Department.

“Secretary Austin’s integrity, experience, and intimate knowledge of the issues facing our military make him the right leader for this moment,” Harris said in a Twitter statement.

Austin was already sworn in administratively on Jan. 22 at the Pentagon, and had served in the role for about three days before the White House ceremony. With Harris participating, it was the first female, Black, and south Asian Vice President swearing in the first Black Defense Secretary.

The ceremony came shortly after Austin and Chairman of the Joint Chiefs of Staff Gen. Mark A. Milley attended the signing of the Executive Order that ends the Pentagon’s ban on transgender individuals serving in the military.

In one of his first steps as Defense Secretary, Austin ordered the services and combatant commands to provide a summary of sexual assault and sexual harassment prevention and accountability measures taken within the past year by Feb. 5. In a memo, Austin said he wants to know more about how data would support addressing sexual misconduct “within a broader violence prevention framework.” He said there will be a meeting of senior leaders “in the coming days” to address the problem.

The order comes alongside a similar one from President Joe Biden, which called for a 90-day commission to pursue ways to fix the problem of sexual assault in the military—a move that the DOD will “aggressively support,” Austin wrote.

“I look forward to working with you as we defend the United States,” Austin wrote to DOD leaders in the memo. “But, as I said before the Senate Armed Services Committee, we cannot accomplish that mission if we also have to battle enemies within the ranks. I’m speaking here about the scourge of sexual assault.”