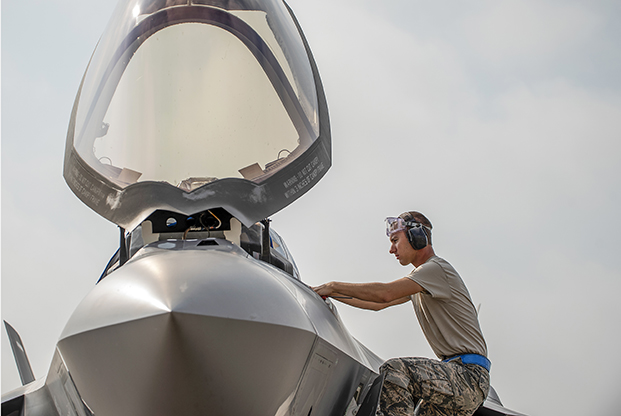 SrA. Eric Hansard climbs into an F-35 at Westover ARB, Mass., in July. The new fleet of F-35s and the need to retrain people contributed to the maintainer shortage. Photo: SSgt. Peter Thompson

The Air Force finally fixed its maintainer shortage this year, closing a gap that had grown to 4,000—6 percent of requirements—as recently as two years ago.

Now the service needs to deal with the maintainer knowledge gap. Getting back to a full complement of 67,000 maintainers is only the first leg in a years-long trek to solve the problem. That’s because the shortfall was made up almost entirely by recruiting new maintainers, rather than retaining experienced mechanics—and also because major deficits persist in the Guard and Reserve.

As Fiscal 2018 ended, the Air Force was still 3,000 short of requirements for 5-level journeyman maintainers and 650 short for 7-level craftsmen. There is also a surplus of 2,900 among 3-level apprentice maintainers.

The result is an “experience gap” that will take years to solve. It takes more than a year for an apprentice to mature to journeyman, and years more to gain enough experience to be rated as a craftsman.

Addressing airmen at AFA’s Air, Space & Cyber Conference, Air Force Secretary Heather Wilson said, “As a result of the actions all of you have taken, the Air Force is more ready for major combat operations today than we were two years ago.” The Air Force, she said, is “moving the whole force to higher levels of readiness with actions that will play out over several years, but there are also steps that are making differences right now. We see them when we visit you.”

“Airmen are hitting the flight line,” said Air Force Chief of Staff Gen. David L. Goldfein in an interview last summer. “The challenge we have is, they’re young.” 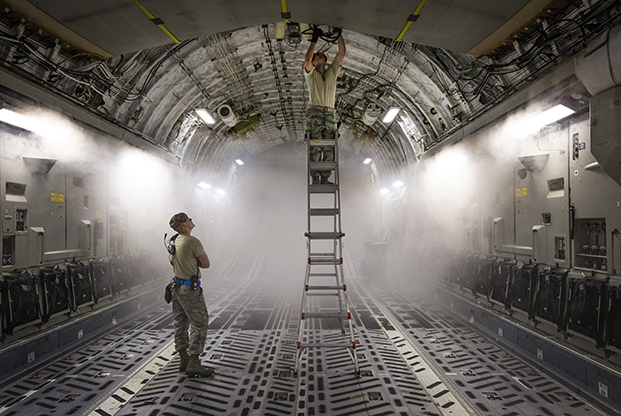 Maintainers stow a power cable on a C-17. Funding to grow the maintainer force was finally approved in 2017. Photo: MSgt. Mark Olsen

The causes of the maintainer shortage include funding inadequacies, the need to retrain maintainers as the F-35 entered the fleet, and Air Force plans that didn’t work out.

Congressional inaction in 2013 led to sequestration, or automatic budget cuts, that hit the service hard. From 2004 to 2015, the service’s Active Duty maintenance force shrank by 17,000 airmen, or 21 percent, bringing USAF maintenance levels to their lowest point in more than 20 years.

Meanwhile, the war against ISIS ramped up and USAF began deploying more airmen to Afghanistan. An aging fleet and the introduction of a whole new aircraft made everything worse.

The Air Force hired Lockheed Martin to provide much of its initial F-35 maintenance capability because its original plan to retire the A-10 and retrain its maintainers to service F-35s didn’t pass muster in Congress.

It wasn’t until 2017 that lawmakers finally came through with additional funding to grow the maintainer force. And while USAF has now made up the shortfall by recruiting more candidates and ramping up throughput at its maintenance schools, the long process of maturing that force still lies ahead.

However, the new airmen are becoming “more experienced every day,” said Air Mobility Command boss Gen. Maryanne Miller, shortly after taking command in September. One of the first things she did was visit new airmen on AMC flight lines. While inexperience is a short-term problem, she said, she is excited by the prospect of new airmen, raised on technology, bringing new ideas to solving old problems.

Miller said she encouraged young maintainers to offer innovative ideas for the command in the hope that not only will they offer new thinking, but that having been given that chance, they will feel more vested in the mission and more willing to stay in uniform. 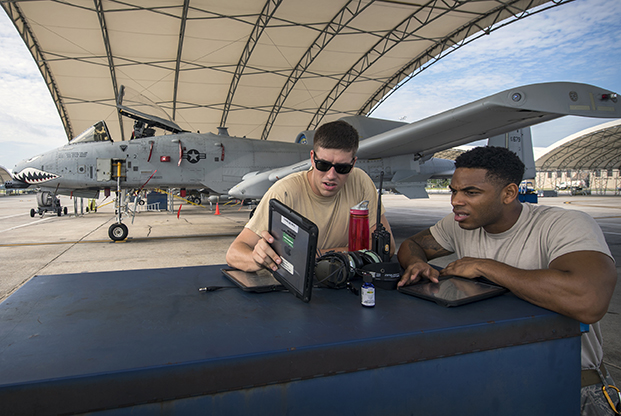 The maintainer shortage in the Guard and Reserve won’t be solved as quickly.

The Guard was short 3,823 maintainers as of mid-October—some 15 percent of its total maintainer force. One major reason: The Active Duty controls the accessioning of their recruits and doubled their number of recruits to address its shortfall. The ripple effect has impacted the Guard.

“The Guard is dependent on the Active Duty for those same seats in basic training and their career training,” said Air National Guard spokesman Capt. Matthew Murphy. “The Active Duty has also offered retention bonuses and other incentives to have maintainers serve longer. This reduces the recruiting pool for the Guard and Reserve because they are staying [on Active Duty] longer.”

To make up the shortfall, the Guard has increased funding to pay for almost 1,300 full-time civilian maintainers and added second-shift maintenance at seven of its F-16 units.

Meanwhile, Air Force Reserve Command was shy about 1,400 maintainers in 2017 and still had more than 1,000 openings at the close of Fiscal 2018, according to Air Force Reserve chief Lt. Gen. Richard W. Scobee.

“We struggled with the maintainer piece because, as the economy improves, there are a lot of job opportunities out there,” he said.

“We have to season our young airmen and get them to be craftsmen at their work,” Wilson told the Senate Armed Services Readiness Subcommittee recently. “But at least now, we have enough people there to do the maintenance that needs to be done.”