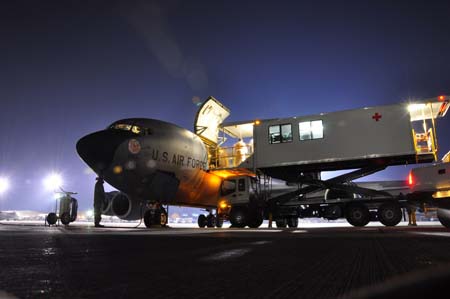 Force has successfully transformed the KC-135 tanker into an effective platform for aeromedical evacuation, but the journey hasn’t been without its challenges. “There’s been a huge investment of time, energy to make those planes adequate airframes to carry patients,” Col. Bruce Guerdin, a Critical Care Air Transport Team doctor with the Florida Air National Guard, told the Daily Report. He added, “We’ve changed the lighting, oxygen system, stanchions for the stretchers—that plane has been turned into something it never was.” KC-135s are attractive in the aeromedevac role today because they can fly unrefueled to the United States from Afghanistan, plus “they’re a fast aircraft [and] they’re available,” explained Brig. Gen. John Owen, the Air Guard physician instrumental in the ANG’s participation in the CCATT mission, which transports seriously injured from the front back to the US. Speed and range aside, the key to the tanker’s success in this role has been innovation. Suffering from poor interior lighting and insufficient electrical power originally, Kansas Air Guardsmen developed a generator and modified lighting. Such changes have made the KC-135 a “very capable air-evac platform,” said Owen. Continue