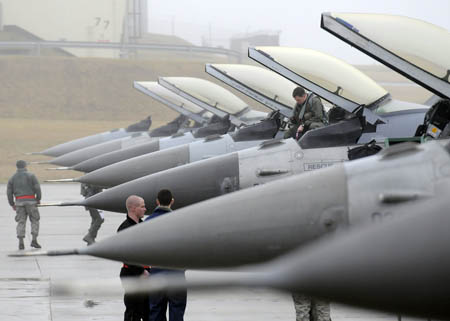 F-16Cs from the 480th Fighter Squadron and more than 250 support personnel departed their home base at Spangdahlem AB, Germany, for Anatolian Falcon 2012. The US fighters will train with the Turkish air force, conducting air defense suppression, air combat and interdiction, reconnaissance, and aerial support missions from Konya AB, Turkey. “The 480th is excited to get on the road to fly with our NATO ally and strengthen the bonds that have been built during the last 60 years,” said 480th FS boss Lt. Col. Paul Murray. “Our air forces pride themselves on adaptability and flexibility, and this exercise showcases those capabilities by allowing us to work with our international partner in fast-paced training scenarios,” he added. In addition to the Spang F-16s, USAF tankers and transports will provide support throughout the exercise, which began on Monday and runs through March 15. (Konya report by SSgt. Daryl Knee and second report by Knee)