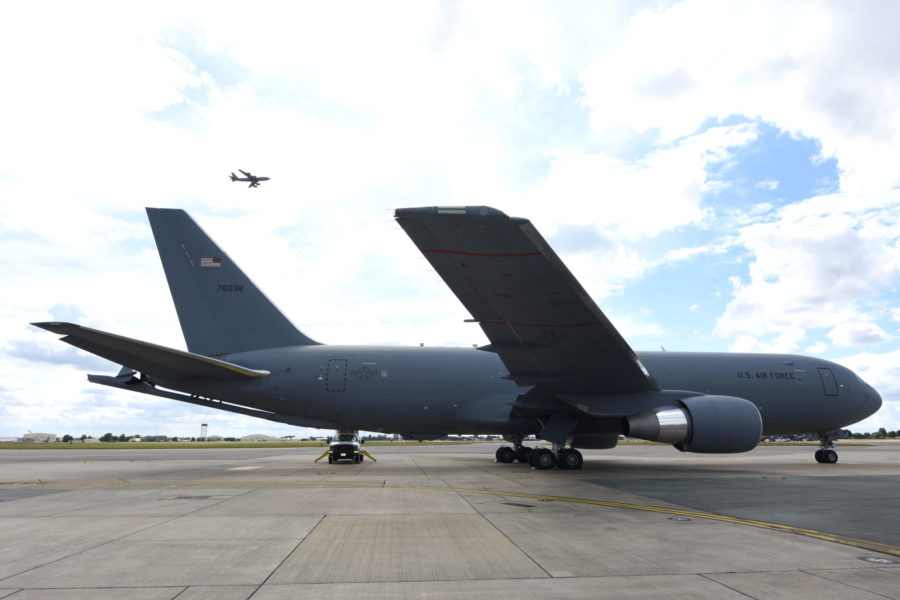 AMC Blocks Tail Flashes for Its KC-46s, Pushing Heritage Aside to Better Manage the Fleet

For decades, the Air Force gray-tailed aircraft have displayed their home base and heritage with a small graphic on the plane’s tail, but that tradition will come to an end for much of the service’s next-generation tanker fleet.

Air Mobility Command has ended the policy of allowing tail flashes on the Active-duty KC-46s, a step that will make it easier for the command to manage its fleet of tankers from base to base. This means the KC-46s based at McConnell Air Force Base, Kan., will not have the white-and-black “MCCONNELL” graphic that the KC-135s had for decades at the base.

The change only applies to the KC-46 because it is the command’s only new fleet of aircraft. All other AMC aircraft already have the tail flashes. AMC, in a statement, said it is also reviewing its policy for placing dedicated crew chief or flying crew chief names on aircraft. KC-135s, for example, often have a black outline with the names of crew chiefs on the fuselage next to command seals.

AMC’s governing document for the policy states that “only mandatory markings are approved and all markings will stay as manufacturer produced. Waivers, changes, or optional marking requests will not be approved.” The only approved markings are the U.S. flag, the National Star, Radio Call Numbers, and “U.S. Air Force” on the fuselage.

While some tanker units, such as the 100th Air Refueling Wing at RAF Mildenhall, United Kingdom, are known for nose art on their aircraft, AMC policy states that only “Internal Nose Art,” such as on the interiors of landing gear doors or weapons bays, would be authorized.

Air Force Magazine, in recent visits to current and future KC-46 bases, spoke to several pilots and maintainers about the policy. Lt. Col. Nicholas Arthur, commander of the 2nd Air Refueling Squadron at Joint Base McGuire-Dix-Lakehurst, N.J., said it is “kind of a bummer,” but there are several reasons the command is moving away from tail flashes that make sense for the health of the fleet. Maintainers are interested in finding ways to still apply dedicated crew chief names to the aircraft, using stickers or magnets inside.

“There’s something valuable about being able to put someone’s name on the jet and take ownership and have pride. … It’s small, but if it gets someone excited, [then] it gives them some pride in what they’re doing,” he said.

At Mildenhall, the nose art helped add some “camaraderie and morale and some bind to the unit. That, ‘Hey, this is our unit. That’s my jet,’” said Master Sgt. Sydney Melton, the 605th Aircraft Maintenance Squadron KC-46 lead production superintendent at McGuire. McGuire’s KC-10s didn’t have the crew chief names on the aircraft, but there is discussion of implementing it when KC-46s are up and running, provided the policy allows it.

The policy only applies to AMC aircraft. Air National Guard, Air Force Reserve Command, and Air Education and Training Command KC-46s are not subject to the limitations. Some units, such as the 157th Air Refueling Wing at Pease Air National Guard Base, N.H., have already applied tail flashes to some of their KC-46s. AETC’s Altus Air Force Base, Okla., has red-and-yellow tail flashes and the “Triangle Y,” a call-back to the wing’s World War II heritage, on the tails of its KC-46s along with the crew chief name.