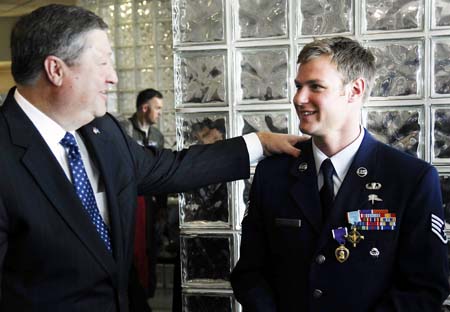 hary Rhyner, a combat controller with the 21st Special Tactics Squadron at Pope AFB, N.C., received the Air Force Cross March 10, joining an elite group of only 187 airmen (four have received multiple awards) who have been awarded the service’s second highest military decoration. (Only 23 other enlisted airmen have received the Air Force Cross.) Air Force Secretary Michael Donley presented Rhyner with the medal during a ceremony at Pope in recognition of Rhyner’s uncommon valor during a coalition mission in Afghanistan’s Shok Valley on April 6, 2008, that evolved into an intense 6.5-hour battle with insurgents. Although wounded, Rhyner called in more than 50 air strikes to continuously repel the enemy and provided suppressive fire to aid in the extraction of his colleagues. “Your actions are now and forever woven into the rich fabric of service, integrity, and excellence that has connected generations of America’s airmen since the very inception of airpower,” Donley told Rhyner, who was a senior airman at the time of the battle. Rhyner accepted the medal with great humility. “Any other combat controller in the same position would’ve done just what I did,” he said. Rhyner also received a Purple Heart during the ceremony from Air Force Chief of Staff Gen. Norton Schwartz for the wounds he suffered. (Pope report by TSgt. Amaani Lyle) (For more read, yesterday’s Fayetteville Observer report and the Goldsboro News-Argus report from March 8.)