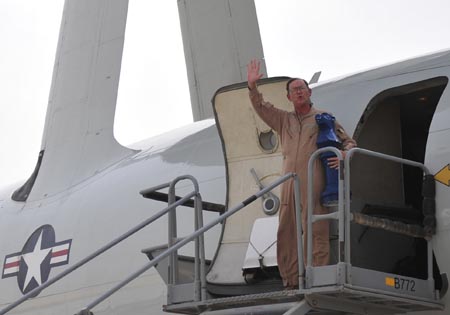 Jon Williams, an E-3 AWACS mission crew commander operating with the 963rd Expeditionary Airborne Air Control Squadron in Southwest Asia, became the first officer—and one of only a handful of airmen overall—to accumulate 10,000 flying hours in the AWACS. He accomplished the feat on July 4 during a mission from an undisclosed air base in the region. It took Williams nearly 30 years and more than 1,200 sorties to reach this milestone. He credits staying healthy and qualified in the E-3 as contributing factors in his success. His next goal is to break the current record of 10,193 flight hours in the AWACS set by an enlisted airman before he returns to his home station of Tinker AFB, Okla. “I should be able to break that in less than two months,” said Williams. (380th AEW report by MSgt. Chance Babin)