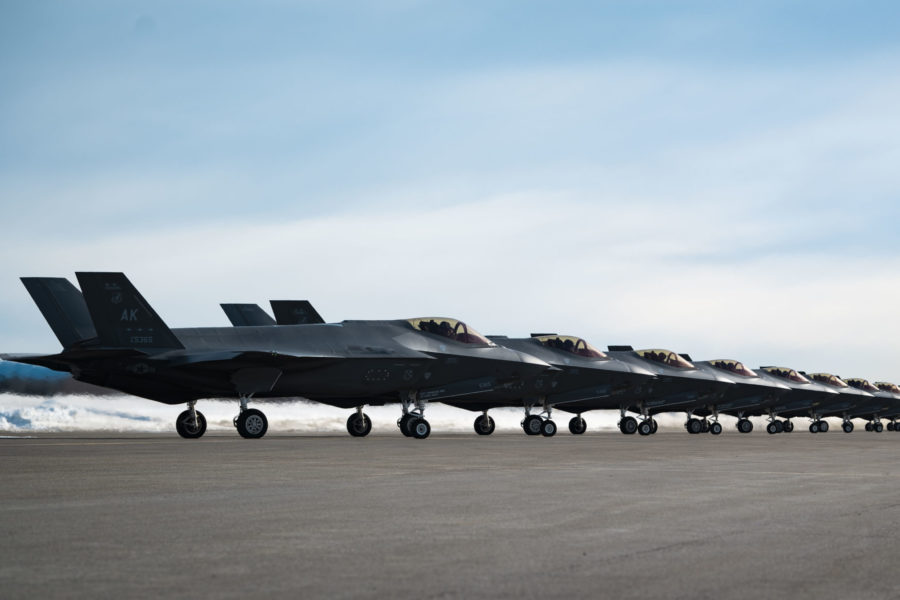 Budget compromises driven by the need to modernize two-thirds of the nuclear triad forced Air Force leaders to cut planned purchases of F-35s in 2023 to just 33—15 fewer than it bought in fiscal 2022 and 27 fewer than 2021, said Lt. Gen. David S. Nahom, the service’s deputy chief of staff for plans and programs.

The Air Force’s $169.5 billion budget plan, released March 28, opted to slow down F-35 purchases while accelerating acquisition of the F-15EX. The necessity to pay for billions in nuclear modernization meant something had to give, and with upgrades pending to the F-35, the service reduced the F-35 buy in 2023 from 48 to 33 in favor of a purchase of 24 F-15EX aircraft. Nahom said the tough choice was in part due to the required stealth to meet the current threat.

“Would we have bought more F-35s if we had more resources? Yes, absolutely,” Nahom told Air Force Magazine in a Pentagon interview.

Air Force Secretary Frank Kendall said March 25 that holding back some purchases while waiting for Block 4 upgrades will deliver a more capable airplane without the added cost of retrofits later. Expanding on that thought, Nahom said that when the F-35 was developed 20 years ago, there was a “different threat” than exists today in modern air defenses developed by China and Russia.

“The threat says we’ve got to get to the [future] capability,” he said. “In a perfect world, would I like the capability and a lot more F-35s—and EXs? Absolutely. But, right now we’ve got to concentrate on making sure we get the F-35 we need. We continue the development, and then we buy as many as we can.”

Nahom said the Air Force must rapidly retire worn-out F-15Cs in favor of new F-15EX aircraft and that although that airplane lacks the F-35’s stealth, it has advantages: It can carry large external weapons, more weapons overall, and more fuel, meaning it can travel farther.

“We have not backed off our investment in the F-35,” he said. “As the threat has evolved, the systems that we need to put on the F-35 have evolved.” And investment in that capability continues.

Other hard choices include retiring 15 E-3 AWACS and 33 F-22 Raptor jets. AWACS capability is important, but similar capabilities are available from NATO, Britain, Japan, and Australia. The F-22s that would be retired are older Block 20 models now used for training, which no longer match up well with the combat fleet, forcing new pilots to relearn things once they get to combat units. Upgrading those, he said, would not be worth the cost, given other priorities facing the service.

The Air Force is obligated to fund nuclear modernization to the tune of $3.6 billion for the Ground Based Strategic Deterrent (GBSD) to replace the 50-year-old Minuteman III; $3.25 billion for the B-21 bomber; and $929 million for the Long Range Standoff (LRSO) weapon.

“We’ve been talking for years about what a nuclear [modernization] bow wave is going to look like,” Nahom said. “Well, it’s here. It’s not just RDT&E money anymore—it’s procurement of the nuclear articles.”

Upgrading two-thirds of the nation’s nuclear triad is an Air Force duty for which there is no alternative.

With the budget now delivered to Congress, lawmakers could add additional F-35s as a plus-up, or demand other cuts. In the coming weeks, each service will deliver lists of unfunded priorities to Congress. USAF has sought additional F-35s in the past but did not last year. Given the numerous international partners waiting in line for new F-35 aircraft, the impact of the Air Force’s decision falls more on the Air Force itself than on prime contractor Lockheed Martin and its suppliers.

Nahom said he is confident the Air Force budget choices were the best under the circumstances.

“Air dominance—air superiority—is the American way of war,” he said. “Our joint force assumes we have it.

“The only people that are going to give them air superiority is the U.S. Air Force. That’s what we do,” he said. “And as warfare changes, especially when you look at what a conflict would be like in the South China Sea, we’re going to have to continue to evolve.”