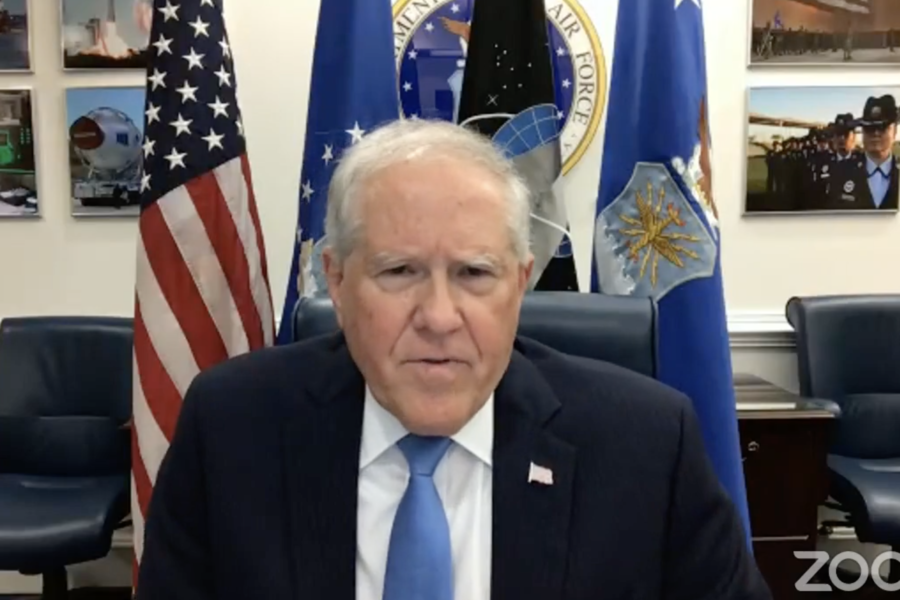 Six of the the Department of the Air Force’s top leaders appeared together virtually Sept. 16, discussing the results of a recent racial and gender disparities survey released by the Air Force Inspector General.

The survey identified disparities in recruitment, retention, and promotions among women, Asian Americans, Native Americans, Latinos, and Pacific Islanders, after a review released in December identified many of the same issues for Black Airmen.

In a call with reporters when the second review was released, Air Force Secretary Frank Kendall said the report “basically points out very clearly, and I think very convincingly, that there are a lot of disparities within the Air Force, in a number of facets of the Air Force experience,” pledging to address the issue.

Speaking again Sept. 16 in a virtual town hall streamed to Facebook, Kendall once more promised to keep focus on the issue of racial, ethnic, and gender disparities, saying, “This is the start of the process, not the end of it.”

Kendall was joined in the town hall by his No. 2, Undersecretary Gina Ortiz Jones, as well as the heads of both the Air and Space Forces, Chief of Staff Gen. Charles Q. Brown Jr. and Chief of Space Operations Gen. John W. “Jay” Raymond, along with the services’ top enlisted leaders, Chief Master Sgt. of the Air Force JoAnne S. Bass and Chief Master Sgt. of the Space Force Roger A. Towberman. Maj. Christine Guthrie moderated the discussion.

Jones, the first woman of color and second openly gay person to serve as undersecretary of the Air Force, said in reading the report that she was struck by what was not in it.

“The report very clearly talks about some of the disparities for minorities and for women. But it’s not talking about disparities for female minorities,” Jones said. “And when we think about having a very targeted approach to ensure that we are addressing some of the unique challenges, some of the unique barriers faced by some of our Airmen and Guardians, we have to understand the intersectional challenges that are presented.”

Speaking with reporters at the time of the report’s release, Air Force Inspector General Lt. Gen. Sami D. Said said the service is not planning any more reviews at the moment to study disparities facing other minorities, such as the LGBTQ community or religious groups. But he did note that he wasn’t “saying no” to the idea permanently.

The most recent review did find that one in every three female service members said they had experienced sexual harassment during their careers. Kendall called that figure “just not acceptable,” with Jones adding that the Air Force is seeking to be “as efficient, as effective as we can be” in streamlining data collection and supporting survivors of harassment and assault.

Beyond harassment, though, Jones also noted that the survey found that 24 percent of female Airmen and Guardians decided to delay telling their unit commanders when they were pregnant, fearing that it would affect their career opportunities. Guthrie, framing that statistic as indicative of a lack of trust in leadership, asked Brown and Raymond specifically how their services were training leadership to better handle those issues.

“One of the areas that I’ve talked about … is how do we develop our first line supervisors,” said Brown. “Whether it’s at the NCO level or the officer level, when we go to Airman Leadership School or [Squadron Officer School], we don’t spend as much time talking about how you understand diversity [and] other people’s perspectives.”

Brown also pointed to the Air Force’s revised wing, vice, and group command screening boards—the service announced Aug. 24 that it was making changes aimed at enhancing “senior leader talent management.” Part of that, Brown said, is by improving diversity. Specifically, he said, boards have been instructed to “not only take a look at [a candidate’s] experience based on their career field, but also look at the diversity of the talent that we have inside of our Air Force, and score appropriately.”

Raymond added that it is important for leaders to speak with and listen to young Airmen and Guardians and framed the issue of diversity and inclusion as one of readiness.

“A more diverse force is a more ready force. It is fundamental to the readiness of our service,” Raymond said.

Bass, the first woman of color to hold her position, also pressed back in her remarks against criticism from some that the focus on diversity and inclusion is unnecessary.

“I might offer that … it’s probably time to wake up and read the over 17,000 comments from over 100,000 Airmen and Guardians that have said that there’s some challenges,” Bass said of the criticism. “So I say, yeah, we do need to wake up.”

Towberman, for his part, stressed the need for respectful dialogue on the issue.

“I can’t change hearts and minds if I don’t first understand hearts and minds, and I can’t understand anything if I’m not willing to listen,” Towberman said. “So, if it’s thinking and if it’s conversation, I’d say in general terms it’s healthy, it’s moving us where we want to be. This is about having conversations, about working together to get through it. We can’t do that if we shut anyone down. If it’s misbehavior, it’s a different thing.”

Kendall echoed Towberman’s point and said he had had a recent experience in that regard, speaking to Sen. Ted Cruz (R-Texas). Cruz has been a particularly vocal critic of diversity initiatives in the military, and Kendall acknowledged that the two men “don’t agree about pretty much anything.”

In the course of a meeting shortly after he took office, though, Kendall said he and Cruz had a “very good conversation” on the issue of race. Specifically, Kendall said he brought up the example to Cruz of times when he has been pulled over by the police while driving.

“There are a lot of our fellow teammates who have not had that experience. They’ve had a very different experience. And for the rest of us to understand that and appreciate it will take us a little ways down the road of being more whatever you want to call it, but I would say just more aware, more conscious of how we all haven’t had the same type of experience.”