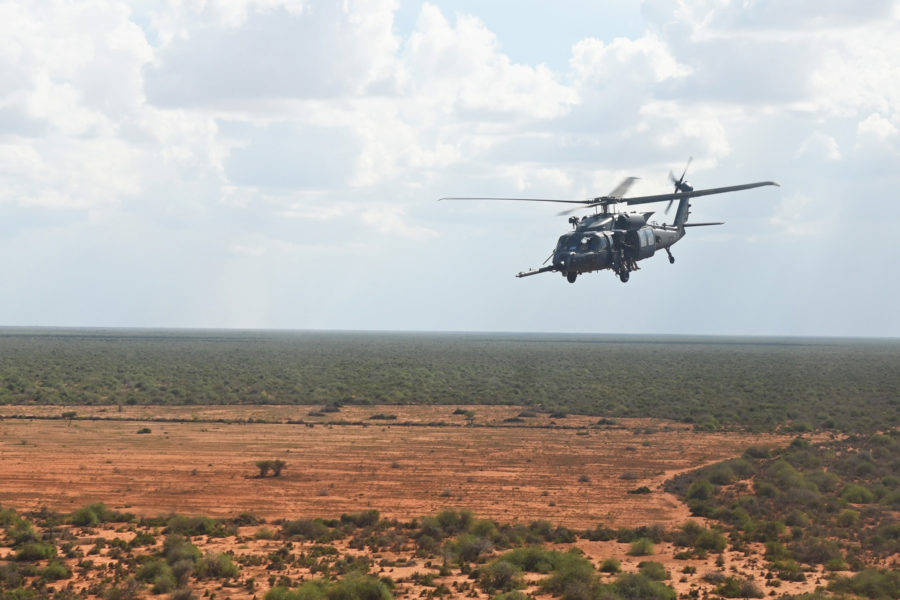 An HH-60W Jolly Green II—the Air Force’s new combat rescue helicopter—and its crew has been credited with the type’s first “saves” in hostile conditions overseas and on its first operational deployment, the service said, but details of the rescues are being withheld because of operational sensitivity.

Guardian Angels of the 347th Rescue Group, operating with HH-60Ws and HC-130Js, rescued two U.S. service members from a “battlefield” in the Horn of Africa in late December, the Air Force said in a release.

The aircraft made its first overseas deployment to the Horn of Africa region in mid-September 2022, shortly after declaring initial operational capability, but the Air Force has declined to say where they went or where specifically they were operating at the time of the saves, other than East Africa. The Air Force is known to operate remotely piloted aircraft like the MQ-9 Reaper and other assets out of a base in Djibouti.

“Even in the vast expanses of Africa, this combined team was able to pull a critical patient from the battlefield with the Air Force’s newest rescue vehicle and place them in the hands of skilled trauma surgeons, ultimately saving two lives,” Lt. Col Thaddeus Ronnau, commander of the Personnel Recovery Task Force and regional director of the Joint Personnel Recovery Center, said in a statement.

The Air Force said alert crews were “activated during the pre-dawn hours and responded quicker than the required theater response times. The initial pickup of the injured was quick, and the team was in and out of the area without incident. They then immediately made for the nearest medical facility for trauma surgery while the pararescuemen performed their own stabilizing emergency care in the aircraft’s cabin. The HC-130J were then called to swiftly move the most seriously wounded member to another location for further treatment. Both lives were saved.”

Ronnau said that by “continuously working to ensure that ‘Jack’s worst day won’t be his last,’ these members of the rescue family upheld the highest virtues of the Code of the Air Rescueman and demonstrated ‘these things we do that others may live.’”

The PRTF is manned, trained ,and equipped to rapidly respond to battlefield situations “to return American, allied and partner forces to friendly control,” Ronnau said. The team is equipped to “travel great distances and fight their way in and out if necessary.”

The Air Force would only say the incident took place “outside the wire in the Horn of Africa.” The action represents the HH-60W’s “first real-world casualty evacuation operation in the African area of responsibility.” The aircraft and personnel were operating under the 449th Air Expeditionary Group.

The Air Force has recently released images of the HH-60Ws performing rescue training exercises in undisclosed locations in Africa. One showed a Jolly Green II of the 41st Rescue Squadron, out of Moody Air Force Base, Ga., in exercises with crew from the USS Hershel Williams, an expeditionary sea base operating in the region. The Dec. 31, 2022 image was labeled as being taken in the Indian Ocean.

The Air Force said the ability to recover “isolated and/or injured persons is a force multiplier that transcends the tactical to the operational and strategic levels,” by preserving “critical resources” and “sustaining the morale, cohesion, and fighting capability of joint and friendly forces.”

However, the Air Force has moved to reduce its buy of the HH-60W from a planned force of 119 aircraft to only 75 aircraft, saying it will have to devise new ways of conducting combat search and rescue in the future, when downed or injured service members are likely to be beyond the practical range of the aircraft and protective force elements.

Gen. Mark D. Kelly, head of Air Combat Command, has said that ACC is studying its future CSAR requirements and is looking at new options beyond the HH-60W.

These could include acquiring more CV-22 Ospreys or a more developed version of Agility Prime, a service prototyping program looking at autonomous, uncrewed, electric vertical takeoff and landing aircraft that could pick up a downed aircrew member. Kelly has said the HH-60W would likely be inadequate for operations in the far east of the Pacific theater under contested conditions.

The Jolly Green II, an upgraded version of the MH-60 Pave Hawk, has a larger cabin, more sensors, improved communications, more weapons and more armor than its predecessor, with nearly double the range.