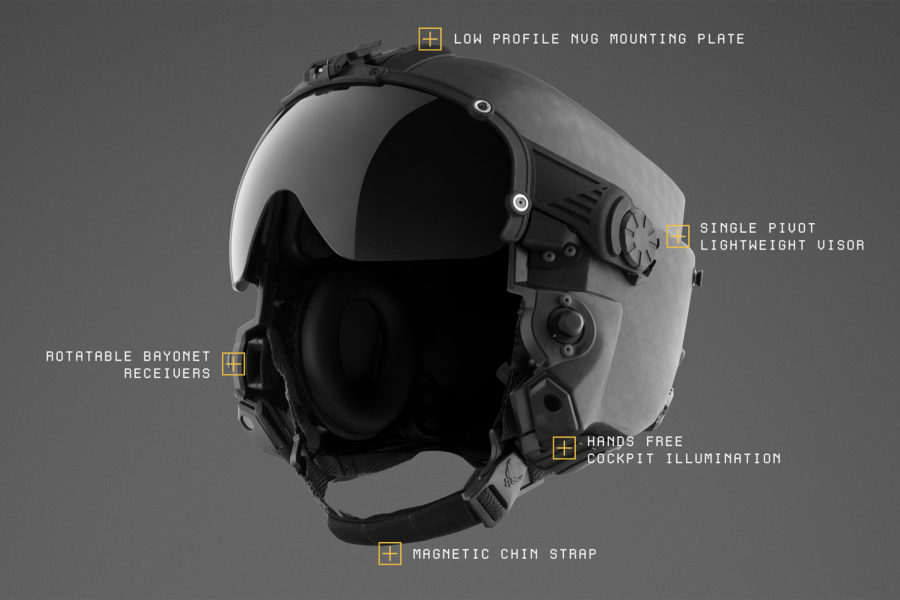 Air Force Picks a Prototype for Its New Aircrew Helmet

The new helmet, which still has to undergo additional research and testing before the Air Force confirms the design and offers a production contract, is better equipped to handle the addition of helmet-mounted devices and will offer a better fit for more diverse crews, the Air Force said in its announcement.

The service’s current standard issue helmet for aircrew is the HGU-55/P, first introduced in the 1980s. With the advancement of helmet-mounted display systems and other devices, however, the weight on crew members’ heads and necks increased, and the center of gravity shifted.

Several academic studies over the years have found that heavier helmets or those with mounted devices can cause greater discomfort or muscle strains in the neck, compounded by the effects of high G forces.

“The legacy helmet was not originally designed to support advances in aircraft helmet-mounted display systems, causing pilots to fly with equipment not optimized for them, especially our female aircrew,” Scott Cota, ACC Plans and Requirements branch aircrew flight equipment program analyst, said in a release.

ACC worked with other major commands and the  Air Force Life Cycle Management Center’s Human Systems Program Office to develop requirements for a next-generation helmet. Among those requirements were “weight, pilot comfort, optimized fitment and protection, stability, optimized center of gravity, and integration with different helmet-mounted systems,” the release stated.

ACC then collaborated with AFWERX, an Air Force innovation-focused organization designed to seek out interesting ideas from nontraditional vendors, to open up the competition process, according to the release. More than 100 designs were submitted, and from those 100, 38 companies were invited to present their proposals. The most promising were tested by the Air Force Research Laboratory, other labs at Wright-Patterson Air Force Base, Ohio, and squadrons at Eglin Air Force Base, Fla.

LIFT touts its design, called AV 2.2, as being substantially lighter than competitors, with increased ventilation and custom fitting options available. The helmet also has a modular design, making it easier to attach devices such as night-vision goggles or a helmet-mounted cueing system (HMCS).

It will still be years before pilots get their hands on the new helmets, however. The Air Force is estimating that a production contract won’t come until 2024, and after that, ACC will deliver them in a phased approach, giving the first ones to those flying on the F-15E Strike Eagle.

One aircraft whose crew won’t need the new helmet is the F-35—the Joint Strike Fighter has its own helmet, custom-made for each pilot and costing roughly $400,000 each.