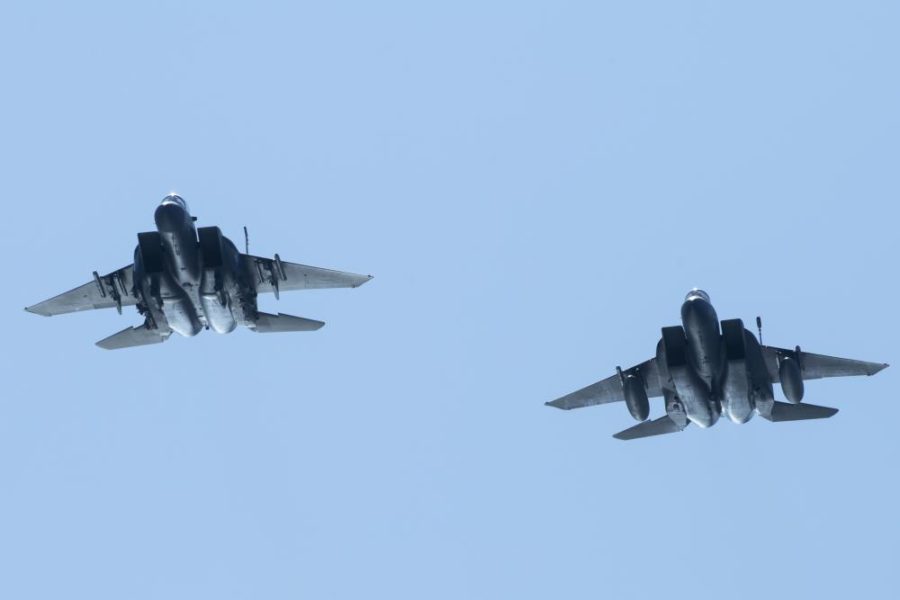 Editor’s Note: This story was updated on May 3 to include clarification from Rep. Rob Wittman’s office on which fleets he was including when discussing divestment numbers.

The Air Force plans to divest nearly 650 fighter aircraft over the coming five years while purchasing fewer than 250, reducing its fleet by exactly 400 tails, a pair of congressmen said during House Armed Services Committee hearings April 27. Those cuts would include a much-reduced buy for the F-15EX

The F-15EX is one of the few fighters the Air Force has planned on buying in the immediate future. But the overall decline of 400 aircraft would be part of a significant divestment plan over the next several years, as outlined by Sen. Deb Fischer (R-Neb.) during a Senate Armed Services Committee hearing several weeks ago.

During that hearing, Fischer said the Air Force was planning to cut 1,468 aircraft and buy 467, for a net decline of 1,001. The service declined to comment at the time, as the 2023 “J-books,” which justify programmatic line items, had not yet been released.

On April 27, Rep. Rob Wittman (R-Va.) and Rep. Donald Norcross (D-N.J.) both cited figures of 646 aircraft to be retired and 246 bought. A spokeswoman for Wittman later told Air Force Magazine he was referring solely to tactical fighter aircraft.

Lawmakers had plenty of concerns over the proposed decline of the fleet, even as Air Force leaders insist they need to sunset older platforms to free up funds to develop and field newer systems.

“I understand [Next Generation Air Dominance] and modernization and all the things that we want our aircraft to do, unmanned platforms. But 400 is one heck of a big vulnerability, capacity, and capability gap,” Wittman told Chief of Staff Gen. Charles Q. Brown Jr.

“That operational deficit, … the numbers aren’t that simple. An aircraft—retiring and buying one aren’t equal. But it is an indicator. … What specifically caused the Air Force to accelerate this [divestment] so significantly?” Norcross asked Lt. Gen. David S. Nahom, deputy chief of staff for plans and programs.

Brown acknowledged that shedding more airframes than it is taking on creates operational risk for the Air Force. But it’s worth it, he argued, because “there’s a balance between the operational risk we will see today as we make that transition, versus the risk we will have in the future if we don’t start to modernize.”

Nahom, for his part, echoed comments he’s made previously that competing priorities in the budget, particularly the need to modernize two legs of the nuclear triad, limited the number of aircraft USAF could buy in the coming years.

Within those overall changes that the Air Force has planned for its fleet, one of the biggest shifts scheduled to take place in the next five years is with the F-15EX Eagle II, the fourth-generation fighter meant to complement the F-35 and NGAD.

But in the longer term, the Air Force’s J-books reveal that the service plans to reduce the overall buy of the EX from 144 to 80—a 44 percent decline. It’s a move Air Force officials hinted at several years ago.

That combination of a bigger buy in this budget and a smaller one overall was intentional, Air Force Secretary Frank Kendall told lawmakers.

“We’re accelerating the buy to buy it out. We’re actually reducing the total quantity substantially. … So we’re trying to buy that out as quickly as possible. We made some other adjustments in order to do that. It’s a more efficient way to buy the capability.”

The need to get the EXs as soon as possible was necessitated by the degraded state of the F-15Cs currently in the fleet, Andrew P. Hunter, the Air Force’s acquisition head, told a HASC panel.

“We’re ramping up production. And we’re doing that to meet the fact that with the aircraft that the F-15EX is replacing in the near term … those aircraft very much need to be replaced, both from a threat perspective and just a sustainability perspective,” Hunter said.

The F-15C/D’s issues have been ongoing for years, and a recent Congressional Budget Office report found the aircraft’s availability had dipped all the way to 45 percent.

Meanwhile, despite not being fifth-gen, the F-15EX has several “unique capabilities,” Kendall said.

“It carries more munitions than the F-35 can. So for certain missions like cruise missile defense of the United States or defensive counter-air missions, it’s a superior platform, despite the lack of some of the full fifth-generation capabilities,” Kendall said. “It does have a number of fifth-generation components on it to give it more capability than a baseline F-15 would have.”

So why is the overall size of the fleet going to be smaller than anticipated? Nahom once again blamed competing budget priorities, saying the service would have to rely more on the F-15E, which is newer than the F-15Cs and Ds, but less advanced than the EXs.

“Right now, based on resources and based on trade-offs, we’re going to have to keep more F-15Es than we initially thought we would have kept,” said Nahom. “We’re going to have a certain size F-15 fleet. In a resource-unconstrained world, those would all be EXs—newer airplanes, better sustainability, more time on them, etc. Right now, as we look at the budgets moving forward, we’re likely to keep more of the F-15Es to be part of that F-15 fleet.”