Skip to content
Materials International Space Station Experiment, or MISSE, is pictured in the grasp of the International Space Station's robotic Special Purpose Dexterous Manipulator. Mission Control personnel on Earth used a robotic arm to relocate MISSE from inside the Japanese Experiment Module airlock to its installation locations on the exterior of space station. The MISSE spaceflight experiment is a collaboration among the Air Force Research Laboratory, NASA, Georgia Tech Research Institute, and DuPont to study the effects of space weather exposure on spacecraft materials. NASA photo.
Expand Photo 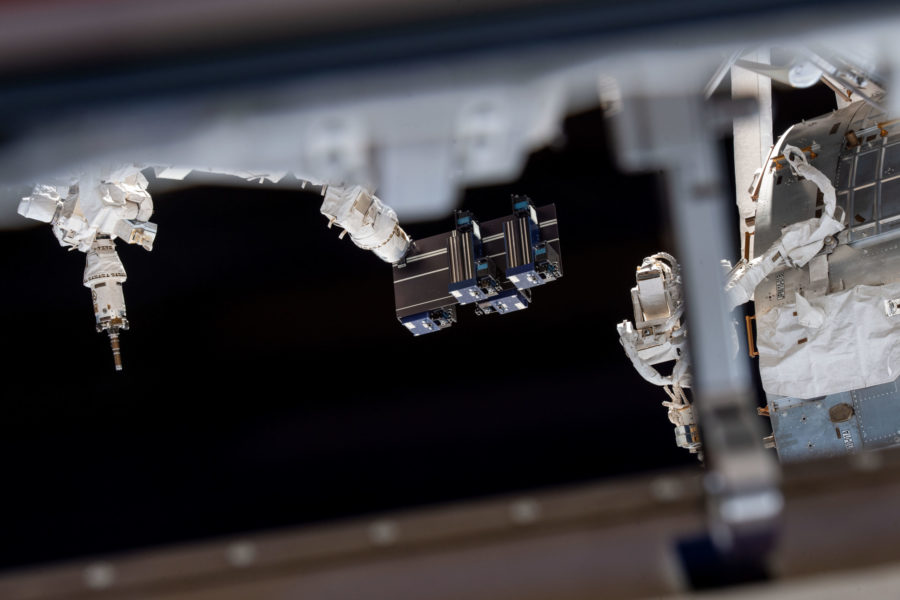 Scientists from the Air Force Research Laboratory and outside organizations have sent a selection of spacecraft construction materials to the International Space Station, there to be exposed to space weather.

In the making for two years, the MISSE-16 experiment—short for 16 Materials International Space Station Experiment—will help to evaluate how the materials hold up in the harsh space environment of radiation and temperature extremes. At the same time, researchers should get a better sense of how well they simulate the space environment in the lab.

MISSE-16 surpasses past MISSE missions by collecting data about the materials during the flight in addition to before and after.

AFRL’s Space Vehicles Directorate, DuPont, the Georgia Tech Research Institute (GTRI), and NASA are part of the test, with DuPont contributing material samples, NASA doing some “pre-flight material characterization,” and GTRI providing “expertise in several areas of high importance to space research,” according to an announcement.

The samples include polymers such as DuPont’s Kapton and Mylar as the “lion’s share” along with composites and ceramics, said Ryan Hoffmann, senior research physicist in the Space Vehicles Directorate, in an email to Air Force Magazine. Some of the materials have been part of satellites before, while others are going to space for the first time.

“Heritage” materials such as Kapton HN have “flown on many missions for many decades,” so this new analysis “will help virtually every spacecraft in operation,” Hoffmann said.

With ground-based testing “notoriously difficult and flawed,” MISSE missions started in 2001 to evaluate materials after their flights on the ISS. But even that method was lacking. It involved taking no in-flight measurements, “so the process of degradation could not be observed,” Hoffmann said. Add to that the fact that “space materials will ‘heal’ to some extent within a matter of hours when exposed to atmosphere.”

To gauge the effects of exposure to space on the materials, AFRL and its collaborators first tested samples in their labs, exposing the samples to radiation then analyzing them with processes such as spectroscopy, atomic force microscopy, and electrical conductance.

MISSE-16 includes cameras for the first time to record any visible changes to the materials while they’re on the space station, and AFRL has an identical camera setup in its space simulation chamber to provide another opportunity for comparison. The researchers will repeat the original analysis after the six-month mission, when the samples are back on Earth.

The Navy should complete the business cases for its proposed alternatives to GPS navigation so that Congress can properly oversee and fund the programs, according to a new report by the Government Accountability Office. The Air Force’s business-case documents for its Resilient-Embedded Global Positioning System/Inertial Navigation System (R-EGI), on the other…

The leader of the National Reconnaissance Office said the NRO will follow orders from U.S. Space Command if needed. Meanwhile, the NRO awaits a finding by the Space Force on whether the office’s intelligence, surveillance, and reconnaissance activities “need to expand." In a webinar by AFA’s Mitchell Institute for Aerospace…