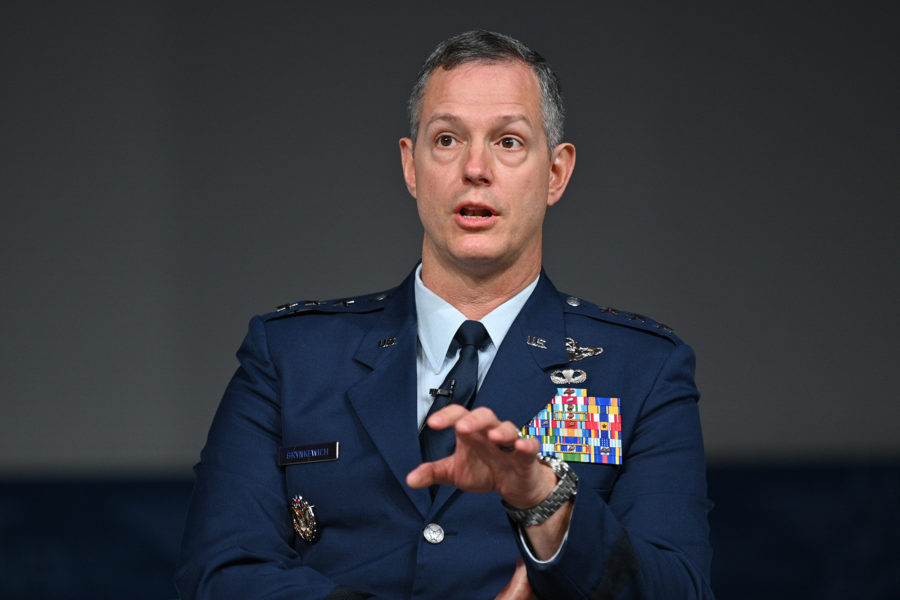 Air Forces Central is standing up a new organization of “super empowered Airmen” who will have the freedom to experiment with cutting-edge technology in the “quite literal sandbox that we have in the Middle East,” AFCENT commander Lt. Gen. Alexus G. Grynkewich announced Sept. 19.

One of their first projects? Looking at buying or building a fleet of small, cheap drones for missions such as short-range intelligence, surveillance, and reconnaissance, medium-range strike, or even over-the-horizon counterterrorism efforts.

Detachment 99, as the organization is called, will get resources to “rapidly innovate and experiment” in an “austere and sometimes dangerous environment,” Grynkewich told reporters at AFA’s Air, Space & Cyber conference.

Among the technologies Detachment 99 will focus on, Grynkewich said, are “digital, unmanned, artificial intelligence, machine learning algorithms.” In particular, he said he wanted the group to build on the experience of the U.S. Naval Forces Central’s Task Force 59.

Task Force 59, stood up in September 2021, was established to “integrate unmanned systems and artificial intelligence with maritime operations,” according to a NAVCENT release. It has already resulted in a number of naval drones deployed in the Red Sea.

“What that did for them, and what we’re hoping to do and intend to do with Detachment 99, is expand the collaborative space with our partners in the region,” Grynkewich said. “So whereas before I might have needed a squadron of F-16s to have a really tight partnership, now I can have a layering of capabilities under Detachment 99 where they can come and collaborate with us.”

It’s not just regional partners, though—Grynkewich said he wants Detachment 99 to “tie into the innovation ecosystem” across the Pentagon, including at the U.S. Air Force Academy. Already, he said, AFCENT has given the Academy funds for Cadets who are looking to build a small unmanned aerial system.

The value of small drones could be especially crucial for missions such as domain awareness, in which AFCENT has a capability gap, Grynkewich said. Troops could use them when they need information on an adversary’s battle plan in addition to over-the-horizon operations in Afghanistan.

“If I can build a small platform and it doesn’t need to go very far because we know that piece of the order of battle is close, then a small … unmanned ISR platform that I can send out to go 20, 30, 100 miles and come back is really useful,” Grynkewich said.

More broadly, Grynkewich said, drones might “find things that are of interest to me in … the littorals of where we would be operating.”

And while the Air Force has put an increasing emphasis on countering swarms of cheap drones in recent years, Grynkewich also expressed interest in “large numbers of medium-range, attritable platforms that I can send out to cause dilemmas for other people.”

Grynkewich is not the first Air Force leader to entertain the possibility of low-cost, attritable aircraft. But while officials have offered varying definitions of what low-cost actually entails, the ones Detachment 99 might build or procure would likely be on the lower end of that spectrum.

“I’m certainly not thinking of an airplane that costs millions of dollars. I’m thinking of things in the thousands of dollars, somewhere below the million dollar price point … where I can buy in volume over time,” Grynkewich said.

With so many different potential uses, Grynkewich added that his “vision” is of a modular system on which different capabilities can be loaded on as needed. More likely, he acknowledged, are several different platforms and payloads.

Ultimately, however, Detachment 99 will have free rein to develop the concept.

“I’m trying to give them as much of a blank slate as I can. I think it could be anything from, if you replicate Task Force 59, that is a series of maritime drones that are networked and feeding maritime domain awareness—I can see the same sort of thing from a network of airborne layers,” Grynkewich said. “I could see us using space capabilities. We could launch a series of cubesats or nanosats that might be able to pull that. So I’m trying to leave things as wide open as possible and let the imagination of our Airmen really drive the way.”