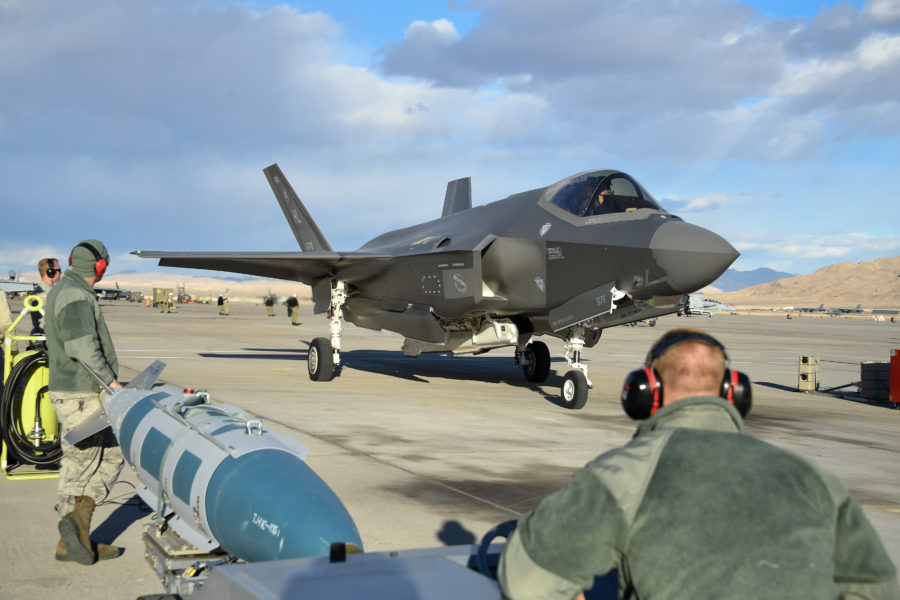 The Air Force would have to bear the full development and integration cost of putting new Adaptive Engine Technology Program engines in its F-35 fleet because the other services can’t fit the powerplants in their versions of the fighter, F-35 Program Executive Officer Lt. Gen. Eric T. Fick told reporters Sept. 15.

“If it’s a one-service, … unique solution, the cost of that solution will be borne by that service,” Fick said. Asked if moving forward with the AETP on the F-35 will depend on whether the Air Force is willing to bear that cost, he replied, “I think so.”

The Air Force could go it alone on the AETP, he said. But the longstanding agreement among F-35 partners is that “you have to pay to be different.”

For the Air Force’s F-35A, “the technology could be remarkable,” Fick said. But, GE and Pratt & Whitney’s AETP engines would “require significant modifications” to fit in the Navy’s F-35C and are “completely a non-starter” for the Marine Corps F-35B, which has vertical takeoff/landing capability. Both engine makers have said the AETP engines will not fit in the F-35B. It might be possible to alter the AETP engine to fit in the F-35C, and if so, “some cost sharing there might be possible,” Fick said.

But at a minimum, choosing to put AETP on any part of the F-35 fleet would mean at least two powerplants to manage for the fleet, and possibly three, Fick said.

“We know we have a demand,” and the Block 4 version of the F-35 will need improved performance from the F135 engine, Fick said. Although the first three capability increments of Block 4 can function with the existing engine, “we know that, going beyond that, we need to do something different,” and the all-up Block 4 can’t fully exploit its new capabilities without more power.

The services are all interested in a more efficient engine that has better “thrust-specific fuel consumption,” Fick noted, and AETP “brings some efficiency gains along with it.” But their wishes must be prioritized—fuel efficiency and range versus thrust or cooling, for example—before a plan can be developed.

The House Armed Services Committee, in its version of the National Defense Authorization Act, said the Joint Program Office has to develop an AETP insertion program, with first capability in 2027.

It would be unfair for the “Navy, Marine Corps, and [international] partners all footing part of the bill” to integrate an engine in the F-35 that only the Air Force can use, Fick said.

To meet the need for more power, Fick said his office is working closely with Pratt & Whitney and the Pentagon to develop a “family of options” for how to give the fighter more engine power. “We need to start … to put a solution set in place to give us the power and cooling we need” for the upgraded version of the fighter.

He noted that Pratt & Whitney has released information about the Enhanced Engine Program—EEP 25 and EEP 25+—which are “re-coring efforts” to improve the F135.

The JPO is “bringing all the pieces together” to assess a way forward, with a series of “Courses of Action” options, but “we know that AETP is one potential solution,” Fick said. If AETP is part of the solution, there will still be a need for EEP to ensure “we’ve got everybody covered.”

Fick would not speculate on how much it would cost to create a separate engine production, maintenance, and supply train for the F-35. Pratt & Whitney has suggested it would cost $40 billion over 50 years of F-35 operations, but Fick declined to say whether he believes that figure to be accurate.

All that said, Fick professed that he “loves competition” and said he’s a “big fan of having two viable manufacturers in the defense space. What we need to figure out, as an enterprise, is are we willing to pay the cost associated with that?”

The JPO is building cost assessments for several options to address the F-35’s power needs, and he expects that work will take 6-12 months.

Regardless of whether the AETP is introduced to the F-35 fleet, “we’re going to have to have supply chains for an updated engine and the legacy engine, even if we go with something that’s common across all the platforms. We have 700 aircraft in the [worldwide F-35] fleet today, and if I add 100 a year across the next five years, that’s 1,200 aircraft before I field an advanced engine.” Those aircraft will all need an engine sustainment enterprise, he said.

“The sustainment footprint” for any option “has got to be established, and supported,” he said.

The discussion about a unique engine for the Air Force’s F-35A raises again the question of whether, after 20 years, it’s time for the services to each have their own program office to manage their own variants of the fighter. But Fick said, “that would be unhealthy.” While commonality among the variants is much lower than once envisioned, the differences are “mainly in the way they take off and land,” he asserted.

The commonality in cockpits, “switchology,” weapons, mission systems, “all those are identical” and continue to provide savings and interoperability that have a huge return on investment, Fick said.