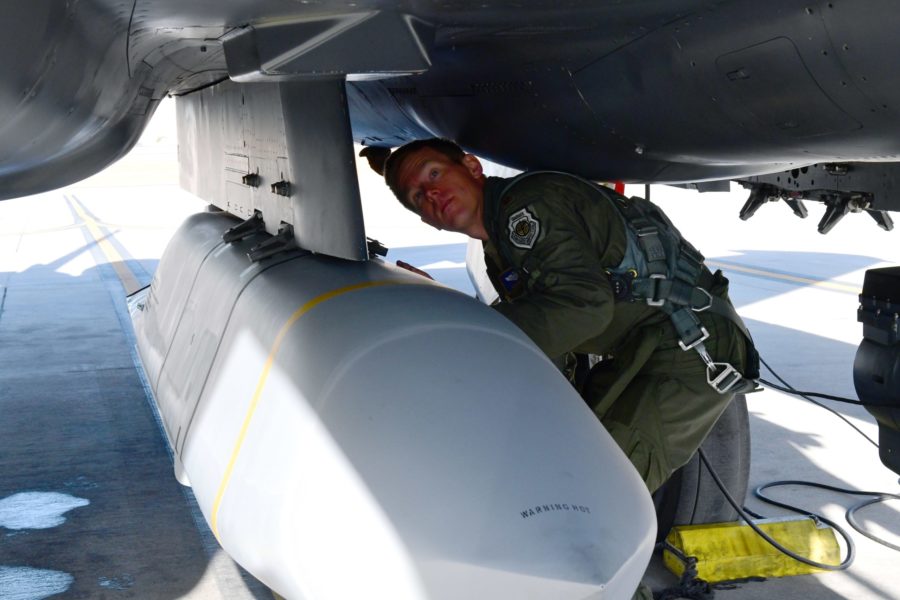 The Department of Defense must do more to make sure its budget matches up with the needs of its overall strategy, according to a new report from the Center for a New American Security. The report places particular focus on the fiscal 2023 budget request, which was submitted to Congress in March before the unclassified National Defense Strategy was made public in October. The National Defense Strategy defines China as the “pacing” longer-term threat and Russia as an “acute” and more temporary challenge.

But the fiscal 2023 budget and the current five-year Future Years Defense Program (FYDP) lack the proper investment to counter those adversaries over the next five years, especially in the area of high-end munitions and in establishing a stronger overseas posture, the report’s authors Stacie Pettyjohn and Hannah Dennis write.

“This report concludes that while the FY23 request makes some strides on both issues, more must be done today to improve the United States’ chances of deterring and, if necessary, defeating the adversary tomorrow,” says the CNAS report, released Nov. 17.

The U.S. needs to do much more, according to the report. A major one is the daunting nature of a potential conflict with China, which is building up its military. Not only would China present a vast array of potential targets, but its extensive air defenses would intercept some U.S. weapons, adding to the U.S. need for a substantial stockpile, according to CNAS.

“In the event of a war with China, deep stockpiles of the right munitions and a distributed and resilient posture will be necessary to deny a quick victory and to then sustain combat operations should the war become protracted,” the report said. “On both accounts, the Department of Defense has urgent work to do.”

With an eye to great power dangers, the CNAS report said, the Air Force has pivoted to purchasing more long-range Joint Air-to-Surface Standoff Missiles (JASSMs) over guided bombs such as the Joint Direct Attack Munitions (JDAMs), and plans to buy around 500 JASSMs a year, according to data analyzed in the report. The service has a program to fire those weapons from cargo planes to increase the service’s flexibility to employ guided cruise missiles.

But the service has not yet purchased a large amount of Long-Range Anti-Ship Missiles (LRSAMs). It plans to purchase 28 in fiscal 2023, ending up with an inventory of 179 in 2027, according to figures in the five-year defense plan CNAS analyzed. That number is insufficient if the U.S. has to face off against China in wartime, the CNAS report argues.

“Since China has numerous cruisers and destroyers with sophisticated surface-to-air missiles, one must assume that some of the LRASMs would be intercepted by these air defenses; in addition, some would hit decoys or other ships, and some would miss and fail, leaving a very small number of the 179 to penetrate defenses and hit Chinese amphibious ships,” the report says.

Another reason why the report says U.S. faces a potential munitions shortfall comes from lessons of the Russian invasion of Ukraine and previous U.S. conflicts in the Middle East, which have shown that major conventional war consumes enormous amounts of ordnance.

“The ongoing war in Ukraine has elevated the issue of munitions stockpiles to front-page news as both Ukrainian and Russian forces continue to consume high volumes of key weapons,” the CNAS report said.

More rudimentary weapons, such as small arms and howitzers, have also been heavily used by both Russia and Ukraine. The war in Ukraine has depleted Russian artillery stocks to the point they have turned to North Korea to replenish their arsenal, U.S. officials have alleged. And they have also eaten into U.S. stocks as well. According to a report by The Wall Street Journal, the U.S. is seeking to purchase 155 mm artillery shells from South Korea that it planned to donate to Kyiv so Ukrainian forces can carry out their fight with the Russians.

The main campaign against ISIS, Operation Inherent Resolve, which began in 2014 and culminated in the retaking of Mosul, Iraq, and Raqqa, Syria, in 2017 provides another example of how quickly precision guided munitions (PGMs) can be expended in war.

The U.S. Air Force was heavily involved in airstrikes against ISIS militants and in support of ground operations by the U.S.’s Iraqi and Syrian partners. A 2021 RAND report assessed that 115,983 weapons were released in coalition airstrikes. Those strikes “depleted precision-guided munition stockpiles” of JDAMs and Hellfire laser-guided-missiles, according to RAND.

“This extended war stressed U.S. weapons supplies and the ability of the defense industry to meet unexpected and prolonged demand for PGMs,” the CNAS report said of Operation Inherent Resolve.

For all of the lessons, however, the CNAS report says its analysis of the Pentagon budget shows that the U.S. is not keeping up with the challenges.

CNAS’s report said while the DOD’s overall 2023 budget request of $24.7 billion in “missiles and munitions” was higher than previous years, only $5.7 billion was for conventional PGMs, excluding strategic nuclear-capable assets such as the Sentinel intercontinental ballistic missile and Trident submarine-launched ballistic missile.

“PGMs have not received the same overall increase over the last eight years as the larger category of ‘missiles and munitions,'” the CNAS authors wrote.

The CNAS authors are not the only experts to express concern over the DOD munitions stockpiles should the U.S. engage in a war with China.

Michèle Flournoy, the former undersecretary of defense for policy, and Michael Brown, the former director of the Pentagon’s Defense Innovation Unit, argued in a recent Foreign Affairs article that “the Pentagon’s leadership must urgently address the gap between what the United States has and what it needs to deter China in the near term,” including working to determine which current unfunded priorities need more resources, such as “addressing critical munitions shortages.”