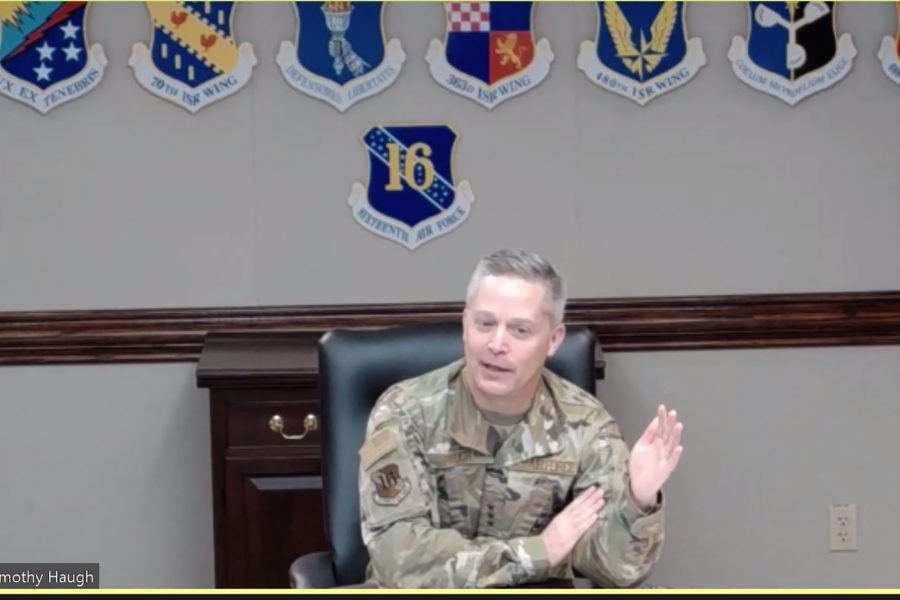 16th Air Force Is Fully Up and Running

Formed in October 2019, the 16th Air Force integrated the former 24th and 26th Air Forces into a single headquarters based in San Antonio and combined intelligence, surveillance, and reconnaissance, cyber, electronic warfare, and information operations. As part of Air Combat Command, the organization will defend the network enabling Joint All-Domain Command and Control, provide cyber and ISR capabilities for five combatant commands and the Intelligence Community, and engage adversaries through a “truth” campaign intended to expose lies and misinformation by strategically sharing images, data, and intelligence.

“We have to be prepared to escalate,” Haugh said. “Our goal is to be able to present a series of options … to allow commanders and interagency to be able to manage escalation.”

Describing his organization as global and organized like a joint task force, he said his objective is to build capacity, capability, and direct ties to operational commands such as Pacific Air Forces and Indo-Pacific Command in Asia and U.S. Air Forces Europe and European Command across the Atlantic. The Joint Task Force construct is easy for other commands to understand and integrate with, he said, adding the new organization is already seeing success with that approach.

Combining cyber, EW, ISR, weather, and information operations is a new approach necessitated by the actions of rival powers and the emerging digital information domain. Haugh described a contentious information warfare environment today and presented his 16th Air Force as a new U.S. entry in a global competition. “We have to be able to produce capability across the entire conflict continuum,” he said. That means gathering intelligence; contesting adversaries who seek to use disorder as a weapon to gain advantage; and to be ready to escalate when competitors’ actions demand response.

“In many ways we have trained ourselves as a service in every Red Flag we’ve been to. That conflict begins when two fighters engage,” Haugh said. “We’ve trained ourselves that conflict begins at that moment. … What do our adversaries view that start point as? Was it the first element of conflict in what we’re dealing with today when one of our companies was hacked?  When the intellectual property of one of our weapon systems was stolen? Was that when conflict began? Was it the day Russian hackers hacked into the [Democratic National Committee]? Was that really the day conflict began? [Or was it] when adversaries went to another level of using malign activity outside of what we would consider norms?”

Russia floods the information zone, he said. “There is no topic that they cannot add additional layers of lies on top of.” By contrast, he said, “China is a much more nuanced actor that uses all the levers of national power, whether that’s economic coercion, its overt lobbying, to now, things more like Russia’s tactics.” China is unique, however, in its strategy to use cyber attacks to gain economic advantage. “They are the one nation in the world that has made that into an industry: stealing intellectual property, monetizing it, and enabling national strategy.”

For the U.S., “As a Department of Defense and the role the 16th Air Force plays, our foundation has to be truth, and we need to get truth into the environment every way we can, and to be able to publicly disclose what those adversaries are doing,” he said. Raising an issue that is likely to set off alarm bells in some circles, he went on to advocate for public affairs staffs “to be operationalized and allow them to combat disinformation.”

The fear among public information advocates is that “operationalizing” public affairs could subject journalists to information operations. But Haugh’s point was that the U.S. public affairs apparatus is often too reluctant or too slow to share information that counters misinformation advanced by competitors. “We tend to over-coordinate our releases across the department,” he said. “That really isn’t the way to compete at speed and velocity. In the future what you would expect us to get to is … everybody communicating.” If messages are not entirely consistent, he suggested, that’s OK. “The information environment will roll over that the next day. It’s a very low-risk endeavor to put more truth into the environment.”

As one example of that approach, he cited a release from U.S. Africa Command that cited “photographic evidence” that the Russian private military contractor Wagner Group is planting landmines and improvised explosive devices in Libya. The release quotes U.S. Marine Corps Maj. Gen. Bradford J. Gering, director of operations at Africa Command, saying, “The Russian-state sponsored Wagner Group is demonstrating a total disregard for the safety and security of Libyans. The Wagner Group’s irresponsible tactics are prolonging conflict and are responsible for the needless suffering and the deaths of innocent civilians. Russia has the power to stop them, just not the will.”

By highlighting those activities, Haugh said, the Department of Defense shines a light on Russia’s use of a contractor as a proxy in a foreign country. Wagner, he said, is “no longer a security company, but a surrogate of the Russian military, and they’re acting with fighters, with land mines. Putting that out there with commercial imagery, with pictures, with narrative—we should be doing that daily.”

Information is also critical to enabling JADC2, and 16th Air Force will play multiple roles, managing the network, providing and securing data on that network, and also as a consumer of that data and user of the network. The critical questions will be: “How do we make data available wherever [it’s needed] in the conflict continuum,” Haugh said. “We need to be able to connect dots, whether that’s between publicly available [data sources] and exquisite classified … all the way to finding that critical element and getting it to the right shooter at the right time. That whole spectrum is enabled by the network that we will be running.”

Citing the Army’s definition of convergence—the ability to get data from any sensor to any command and control node to any shooter at any time—“that is going to be core to what we do in JADC2, to be able to move that data.” The complex nature of where data is, what is legal and ethical, the role of different agencies within the U.S. government or among allies—all these issues become increasingly complex over time, he said. But for JADC2 to be put into effect successfully, all must also be addressed.