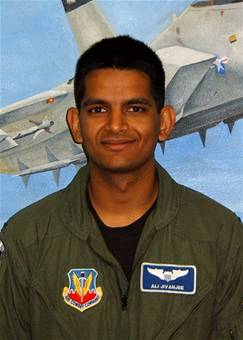 he Air Force released the name of the pilot who died as a result of the Feb. 20 accident involving two F-15s flying a training sortie over the Gulf of Mexico. A Feb. 22 statement says that 1st Lt. Ali Jivanjee with the 58th Fighter Squadron at Eglin AFB, Fla., “died due to injuries sustained” in the accident. The identity of the second pilot, who has been released from the hospital, is being withheld due to the in-progress accident investigation. Col. Todd Harmer, commander of the 33rd Fighter Wing at Eglin, suspended flying operations immediately after the accident, but flying should resume Feb. 25.