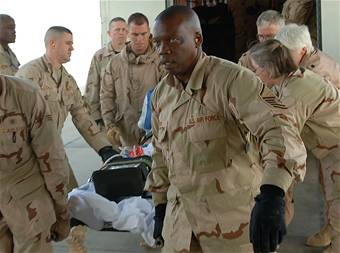 Nine airmen from Air Force Reserve Command’s 920th Aeromedical Staging Squadron at Patrick AFB, Fla. are deployed to Balad Air Base, Iraq, to support the mission of the 332nd Expeditionary Medical Group. The Patrick Reservists joined with about 77 other Reservists and Air National Guardsmen from some 20 different units, forming 22 percent of the Air Force medical force at Balad, reports journalist MSgt. Bryan Ripple. Some of the reservists are on repeat deployments to Southwest Asia. The theater hospital, which is equivalent to a level 1 trauma center in the US, handles some 700 patients a month on average—Americans, Iraqi soldiers and civilians, and coalition and third country nationals.