No Funds, No Surge: 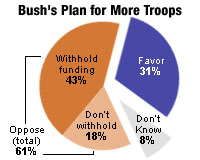 Polls continue to show that Americans, for the most part, do not want to send additional troops to Iraq, and many believe Congress should cut the purse strings. A new survey by the Pew Research Center for the People and the Media shows that 61 percent oppose an increase in US forces for Iraq. It also shows that within that majority, some 43 percent want lawmakers to withhold money to fund such an increase.