50 Years Behind a Camera: 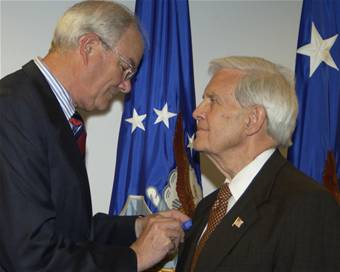 Air Force Secretary Michael Wynne presented an Exceptional Civilian Service Award to civilian Air Force photographer Ron Hall, during a ceremony at the Pentagon on April 17. Hall has photographed Air Force leaders and events for 50 years, covering 18 service Secretaries and 16 Chiefs of Staff. Wynne highlighted Hall’s body of work that took him from foreign visits to Corona conferences. Efforts are being made for his work to be displayed at the National Museum of the Air Force at Wright-Patterson AFB, Ohio.