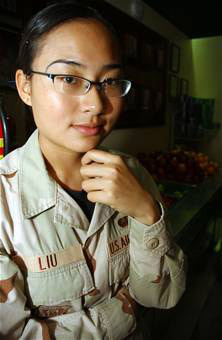 Yi Liu has only been living in the United States since 2003, having emigrated from Canton Province to San Francisco’s Chinatown when she was 21. Soon afterward, she met an Air Force recruiter and decided to join the Air Force. “She was everything I wanted to be… resolute, confident, and helpful,” Liu said. Liu survived basic training, despite having to master a new language, and within a year had gained a five-level proficiency and became an American citizen. Airman First Class Liu is now assigned to the 379th Expeditionary Services Squadron in Southwest Asia, deployed from Cannon AFB, N.M. She also spends free time teaching the Chinese language and hopes to serve as an Air Force linguist.