Looking for a B-17 Crew Remains 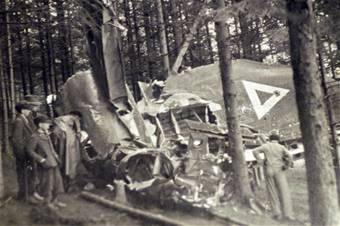 Joint POW/MIA Accounting Command recovery team left Austria last week after not finding human remains at the site of a B-17 bomber shot down by German fighters on May 10, 1944. The team, which plans to return, reports that during the recovery effort they received helpful information on the B-17 from Harold Dwyer, a World War II B-17 pilot and the younger brother of 1st Lt. Stanley Dwyer, the pilot of the crashed B-17. Harold Dwyer and family were at the site to erect a memorial stone during a service Aug. 27. Of the 10 crew members aboard the crashed aircraft, Stanley Dwyer and his gunner Sgt. John Boros did not bail out.