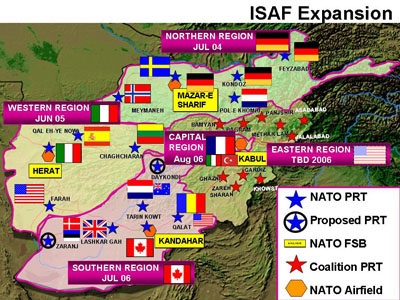 Several NATO alliance members—including Britain, Canada, Romania, and Poland—have agreed to send additional troops to Afghanistan, responding to a call for some 2,000 more troops from Marine Corps Gen. James Jones, Supreme Allied Commander Europe. Jones issued the request a couple of weeks ago, saying NATO countries had promised to provide them to supplement the 20,000 alliance troops already engaged in Afghanistan. Initially it appeared he might have trouble convincing the allies to pony up the troops, but Jones told reporters at the Pentagon Wednesday that offers were slow in coming but he now believes “numerically we will go beyond the 2,000 manpower figure.” While Jones is happy with the number of forces in the region, he is still seeking additional armed helicopters and tactical transport aircraft. Still, he said, “I think there’s very positive news ahead” on needed forces.