From Sea to Mountains 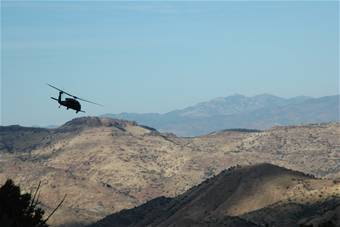 Reservists of the 301st Rescue Squadron at Patrick AFB, Fla., headed west last month to practice for their upcoming deployment to Southwest Asia. Part of Air Force Reserve Command’s 920th Rescue Wing at Patrick, the squadron spends most of its rescue time over water and low-lying coastal areas. The airmen traveled to Davis-Monthan AFB, Ariz., to experience mountain flying. Per Col. Philip Manning, 920th RQW commander: “Small mistakes can be catastrophic. This is where we work out those small mistakes.”