Higher, Faster and On Target: 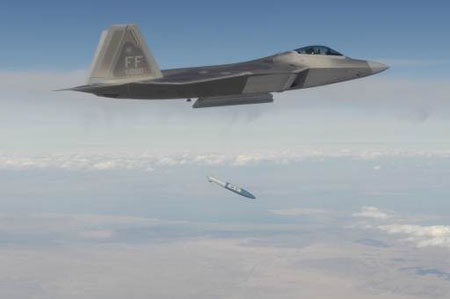 An F-22 Raptor flying at Mach 1.5 released a 1,000-pound Joint Direct Attack Munition from 50,000 feet over the White Sands Missile Range in New Mexico last month, destroying a small ground target from a range of 24 miles, said Lockheed Martin and Boeing officials earlier this week. Lt. Col. Raymond Toth, 411th Flight Test Squadron commander, said that the May test was the highest and fastest JDAM drop yet performed with the new fifth-generation fighter, proving it’s “true in the air-to-ground mission,” as well as air-to-air.