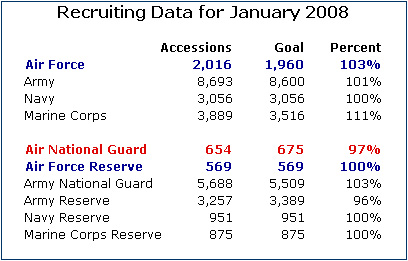 iting for the Air National Guard continued to lag somewhat in the fourth month of the new fiscal year. According to the latest Pentagon statistics (see chart), the Air Guard achieved 97 percent of its goal for January 2008, while the active duty Air Force bettered its goal by three percent and Air Force Reserve Command stood pat at 100 percent. In real numbers, the Air Guard fell short of its goal by 21 recruits; that is better than December.