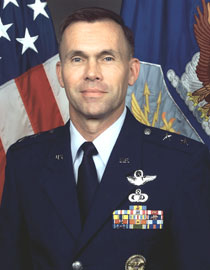 Gen. John “Jack” Hudson, a former director of the F-35 Joint Strike Fighter program, on Monday took command of Air Force Materiel Command’s Aeronautical Systems Center at Wright-Patterson AFB, Ohio. As ASC commander, Hudson is USAF’s Program Executive Officer for aircraft procurement and modernization. ASC is one of USAF’s largest product divisions. The Air Force said ASC has a budget of $19 billion and some 12,000 workers around the world.