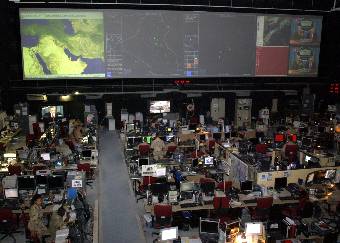 One of the key concepts being aired during JEFX is the Theater Battle Operations Net-centric Environment (TBONE), a concept sprung from the Air Force’s C2 Battlelab. Speaking to reporters at the Pentagon, the battlelab’s Maj. Pat McAtee called the project a “new engine” for the CAOC—developed in conjunction with a software upgrade for the Theater Battle Management Core Systems version 1.1.4. TBONE is a program that moves “at the speed of warfare,” said McAtee, noting that a total of 20 applications are being melded into one under the TBONE effort. The goal is build a “continuous air tasking cycle” by shifting the CAOC weapon system to a Web-based, PC-capable application environment that uses portal technologies in a more flexible and versatile net-centric environment. The present-day CAOC suffers from difficulties in utilizing ISR data to assess actions and operations—essentially erecting a roadblock preventing expansion of effects-based warfare.