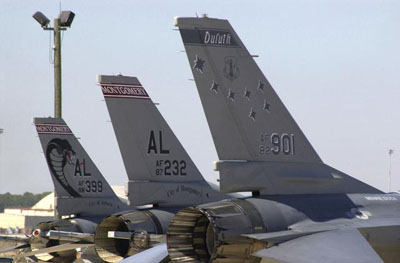 ation Noble Eagle, the homeland air defense effort begun after the 9/11 terrorist strikes, has conducted 46,780 sorties. That’s a combined total of fighter, tanker, surveillance and reconnaissance aircraft, and Civil Air Patrol sorties. (Click here for table of ONE statistics.) NORAD oversees the operation, which is directly managed by the Air National Guard-led Continental US NORAD Region at Tyndall AFB, Fla. Of the total 34,300 fighter sorties, more than 70 percent have been flown by ANG or Air Force Reserve Command aircrews. And, Air Guardsmen and Reservists have flown more than 79 percent of the total tanker sorties.