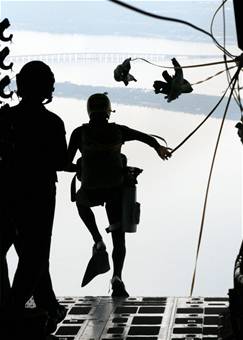 Pararescue jumper trainees spend two weeks in the water as part of their six-week air operations training before they become fully trained PJs. This year, 20 PJ trainees and 13 instructors from the 342nd Training Squadron at Kirtland AFB, N.M., took the plunge into the Banana River off Patrick AFB, Fla. While at Patrick, the trainees practiced a “rigging alternate method zodiac drop,” states an Air Force news release. Jumping from HC-130 aircraft from Air Force Reserve Command’s 920th Rescue Wing at Patrick, the prospective PJs had to open inflatable Zodiac boats dropped with equipment pallets. According to TSgt. Robert Grande, a 920th RQW radio operator, the PJ trainees “all seemed focused and committee the whole way through.”