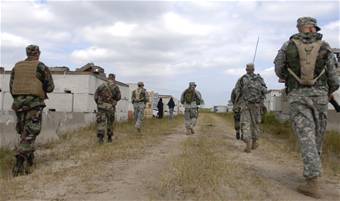 Air Force joint tactical air controllers received more and better training at this year’s Atlantic Strike IV exercise at Avon Park Air Force Range, Fla., according to a USAF news release. Atlantic Strike—a twice yearly close air support training event—is the only training opportunity for JTACs to use ROVER—the remote operated video enhanced receiver system, says Maj. Raymond Brennan, exercise director. “We’re able to provide training for these troops … before they get over in-theater so they don’t have to learn on the fly,” said Brennan. This particular Atlantic Strike, which trained some 700 joint forces over about four days, for the first time employed helicopters in a CAS role.