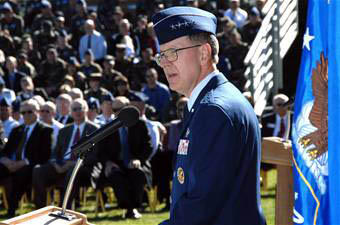 . Robert Kehler has taken command of Air Force Space Command, headquartered at Peterson AFB, Colo. Kehler, who last served as deputy commander at US Strategic Command, replaced Gen. Kevin Chilton, who officially became STRATCOM commander on Oct. 3. Kehler pinned on his fourth star on Oct. 12 and formally took the reins for AFSPC on Oct. 24. Gen. Duncan McNabb, Air Force vice chief of staff, called Kehler the “perfect airman to lead space command” because he is “a decisive integrator with the right mix of operational expertise and strategic savvy.” Kehler began his career as a missile combat crewmember and commanded various missile units. He previously served at AFSPC as inspector general and deputy director of operations, and commanded the 30th Space Wing at Vandenberg AFB, Calif., and the 21st Space Wing at Peterson.