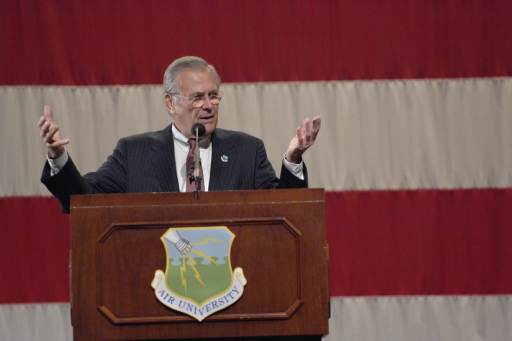 Defense Secretary Donald Rumsfeld has redeemed himself from the awkward comments he made earlier this month about getting the Air Force and Navy to contribute more troops to aid ground forces in the war on terror. Speaking to primarily Air Force members at Maxwell AFB, Ala., last week, Rumsfeld said: “The Air Force and the Navy have been just stellar. [Chief of Naval Operations] Mike Mullen and [Air Force Chief of Staff] Buzz Moseley and their teams have leaned forward to provide all kinds of assistance in Iraq and Afghanistan and around the world, and taking over more missions that they never would have imagined they would have taken over to relieve pressure on the ground forces. And, it has just been a terrific performance by the Navy and by the Air Force.” Ahem.