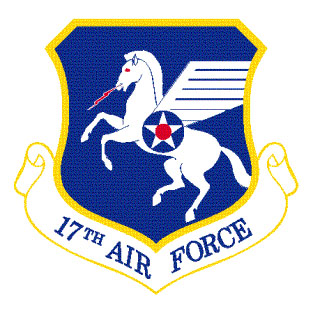 S Air Forces in Europe plans to reactivate 17th Air Force to serve as its component headquarters for the new Africa Command. USAFE already has a 17th AF transition team working the development of the air component for AFRICOM, which stood up initially on Oct. 1. USAFE spokesman Capt. Greg Hignite said in an e-mail response to questions that the team is still working on much of the NAF structure, but it probably will comprise some 300 airmen, including about 150 at the NAF headquarters itself and 130 to form a “tailored” air operations center. Plans call for a two-star general officer to lead the NAF, seconded by a one-star vice commander. USAFE expects to have initial operational capability for 17th AF by Oct. 1, 2008 and could name its location as early as this spring. This past summer, USAFE hosted African air chiefs in Germany to talk specifically about the type of air assets most needed for the Africa mission. Just this past year, says Hignite, USAFE conducted more than 200 humanitarian outreach and military-to-military exchanges in Africa. The command this fall provided airlift for some 400 Rwandan peacekeeping soldiers into the Darfur region. (The Air Force first activated 17th AF in 1953 at French Morocco and inactivated it in 1996 at its last location, Sembach Air Base.)