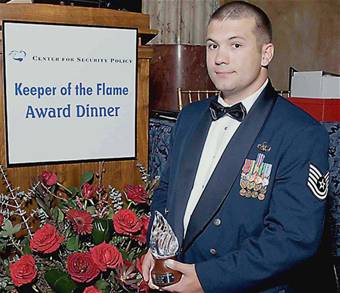 TSgt. Stephen Achey, a combat controller with the 682nd Air Support Operations Squadron, Shaw AFB, S.C., received a Keeper of the Flame Award last week, along with members of the other military services and Rep. Duncan Hunter (R-Calif.), chairman of the House Armed Services Committee. Achey already has received a Silver Star for his actions in Afghanistan in 2002, when he risked his life to retrieve a GPS locator and call in air support during a firefight. Among past recipients of the Keeper Award are former President Ronald Reagan, former Defense Secretary Caspar Weinberger, and Air Force Gen. Richard Myers, former Chairman of the Joint Chiefs of Staff.