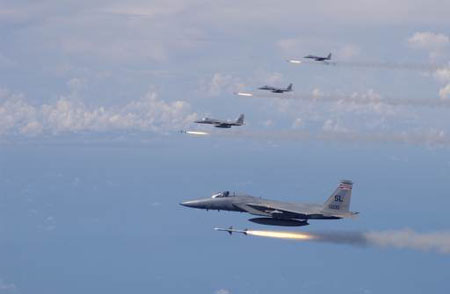 Missouri Air National Guard pilot, Col. Jon “JB” Kelk has flown more than 4,000 hours in the F-15 Eagle fighter, reports the St. Louis Post Dispatch. Kelk, who is with the 131st Fighter Wing at Lambert Field near St. Louis, has at least one other historic achievement to his name. On Jan. 17, 1991, Capt. Jon Kelk, flying an F-15C, shot down an Iraqi Air Force MiG-29—the first air-to-air victory of Gulf War I. The 131st FW is losing its F-15s under BRAC 2005, and when that happens Kelk plans to retire from the Air Guard.