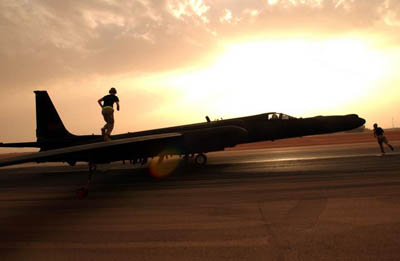 -2 Dragon Lady has been dedicated to missions in Southwest Asia for a long, long time, becoming the second Air Force special intelligence-surveillance-reconnaissance asset to log 6,000 consecutive days. For the U-2 high flying recon airplane and its pilots and maintainers, Jan. 23 marked their 6,000th day. USAF deployed the U-2 to Southwest Asia a few days after the start of Operation Desert Shield in August 1990. According to the 9th Reconnaissance Wing historian, the Dragon Lady fleet flew 260 sorties during Operation Desert Storm and was responsible for approximately 50 percent of all imagery intelligence. The U-2s remain in Southwest Asia today, providing high-altitude reconnaissance for the war on terror.